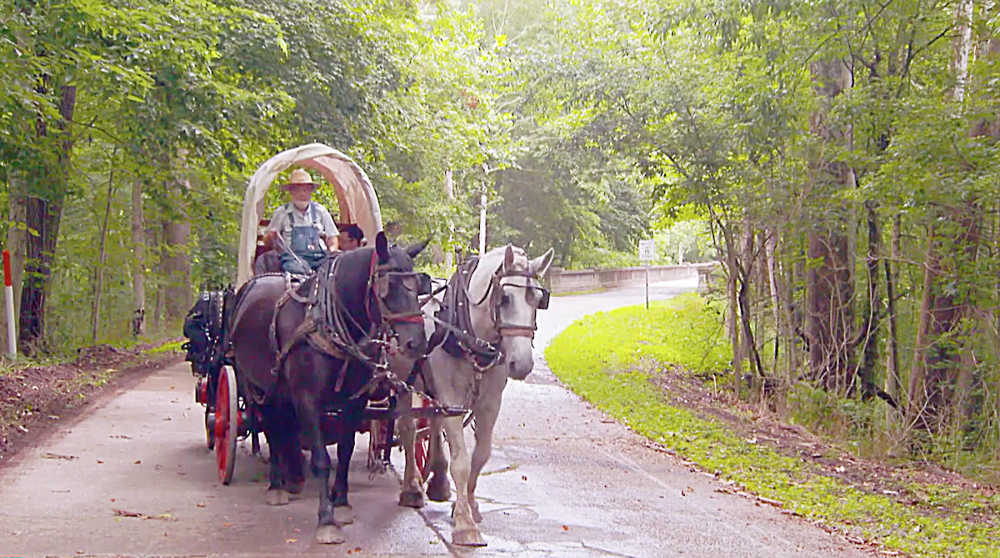 In a scene from “10 Streets that Changed America,” set to air at 8 p.m. Tuesday on PBS, Ron Catt of Clay City drives a chuckwagon along a scenic stretch of the Old National Road near Putnamville.
Courtesy photo

PUTNAMVILLE — Should you find yourself on County Road 570 South in Warren Township, there are essentially only three possible explanations.

1) You are a resident of the Putnamville area.

2) You are a history buff, specifically a lover of historic bridges.

Yet this quaint, out-of-the way section of road will briefly be featured on a national PBS series on Tuesday evening.

When “10 that Changed America” makes its season debut at 8 p.m. with “10 Streets that Change America,” the National Road will be one of the featured roadways.

The scenic stretch of county road was once part of the National Road (back before U.S. 40 became a four-lane) and wound up being the perfect spot to film part of the action, according to series Producer Dan Protess.

Protess said when the National Road was chosen as one of the 10 Streets that Changed America, he knew he wanted to capture some scenic shots in the hills of southern Pennsylvania. However, they also needed something a bit further west.

Instead of choosing a site, though, series producers chose a personality in Joe Jarzen of Indianapolis. Now an executive for Keep Indianapolis Beautiful, Jarzen is formerly of the Indiana National Road Association.

Explaining that you cast a documentary the way you would cast a feature film, Protess knew he had to build part of the National Road segment around Jarzen’s big personality.

It was actually Jarzen who suggested the Putnamville site, noting there is even an historic bridge adding to the ambience.

“He knew it would be a perfect place to film,” Protess said. “Then I looked on Google Street View and sure enough it looked beautiful.”

So the segment, featuring series host Geoffrey Baer, Jarzen, some beautiful Hoosier foliage and even the 1923 arch bridge over Deer Creek now known as Putnam County Bridge No. 237.

Even Clay County became a part of the action in the form of a chuckwagon from Clay City.

“I knew I wanted to do this interview in a covered wagon, and I told (my associate producer) to find a covered wagon in Indiana,” Protess said. “He found this guy online named Randy ‘Big Boy’ Dyer who met us out there with a team of horses and a chuckwagon and we interviewed Joe there.”

The chuckwagon was driven by Ron Catt, also of Clay City.

“It was a first for all of us, I’ve never done an interview in a covered wagon,” Protess said. “And for good reason, it was very noisy and bumpy.”

Putnamville is just one of at least three West Central Indiana connections to this three-episode season of “10 that Changed America.” Having been in Cincinnati earlier in the week for a segment on the John A. Roebling Bridge, the crew traveled to Plainfield to spend the night.

While in that Hendricks County town, they learned about Van Buren Elm, the former site of a tree (the spot is now marked by a boulder) where, in 1842, where President Martin Van Buren was dumped from his carriage as his driver made a sharp turn around the elm.

The locals viewed the president’s tumble into the mud with a bit of glee, as he had recently vetoed further funding for their beloved National Road.

“It’s an unusal historical marker, for a site where a president was thrown off his horse,” Protess noted.

Before making the trip west to Putnamville, the crew also took the opportunity to get some shots of Plainfield’s scenic main street along U.S. 40.

After stops in Plainfield and Putnamville, the crew lunched in Greencastle before making the trip back to their home base in Chicago.

“It helped we’re based in Chicago and we were just on the road constantly this past summer,” Protess said. “So it helped to be able to do an interview a short drive away from Chicago because we got to see our families that week.”

After this evening’s episode, even next week will have a connection to the area. The July 17 episode “10 Monuments that Changed America,” will feature the AIDS Quilt, whose creator Cleve Jones comes from a Quaker family from Bee Ridge, near Brazil.

The season debut of “10 that Changed America” can be viewed locally at 8 p.m. on either WFYI Channel 20 out of Indianapolis or WTIU Channel 30 out of Bloomington.

Episodes from past seasons of the history series, which focuses on America’s built environment, have included 10 Buildings, 10 Homes, 10 Parks and 10 Towns.