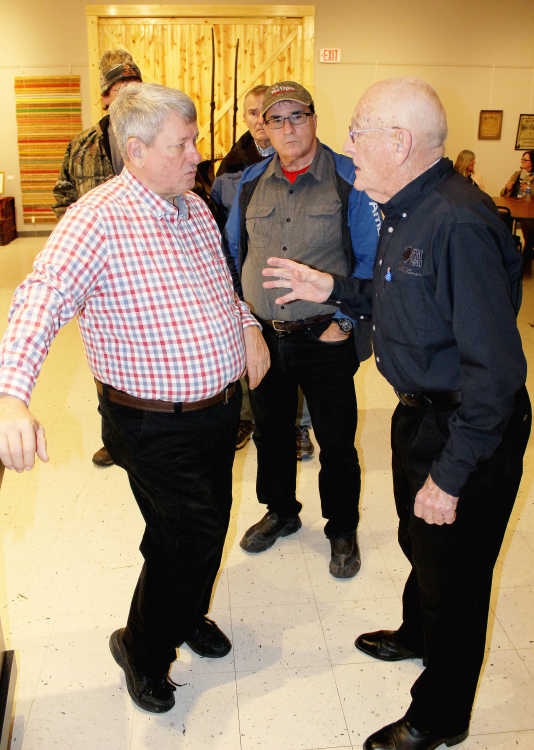 But he’s got nothing on Putnam County’s Larry Tippin.

Tippin, who has been county historian for 15 years, has been rediscovering Putnam County through examination of its small towns -- some that have vanished from any map, some few have ever heard of and others the public has been familiar with at least by name -- for a series of programs at the Putnam County Museum. The first of those was Thursday with 22 people in attendance on a blustery winter night. 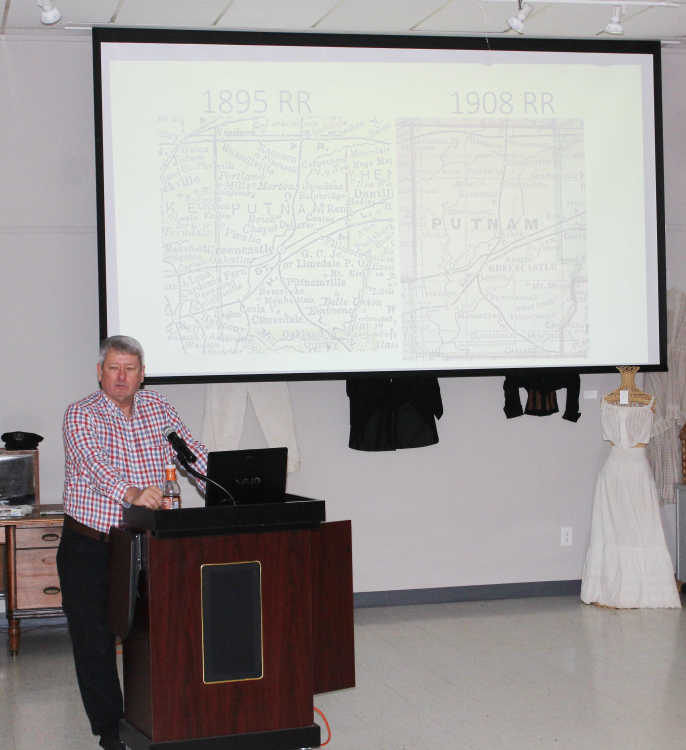 Addressing a Putnam County Museum audience Thursday night, Putnam Historian Larry Tippin talks about the towns along the railroads on maps from 1895 and 1908.
Banner Graphic/Eric Bernsee

Tippin focused his attention on three towns for the first segment of the series -- Carpentersville, Vivalia and Horntown -- one tiny town from each tier of the county, running north to south. But that didn’t stop him from dropping in nuggets about other places or vanished villages like Valley Forge (“Did you know we had a Valley Forge in Putnam County?”), Samuelsburg (“on the Ocean-to-Ocean Highway,” aka U.S. 36), Swanksville and Wheaton along the way.

And that he did, showing much of his research materials such as an 1879 atlas that includes a town called Cairo near Fincastle, and an 1864 map that puts the town of Alma due south of the Edna Collings bridge but shows no sign of Clinton Falls anywhere.

On an 1895 railroad map, Tippin shared where the vanished village of Wheaton stood east of Roachdale toward North Salem, while the town of Delmar is shown northwest of Fillmore and east of Brick Chapel. He also detailed how Limedale was originally known as Greencastle Junction due to the junction of two railroads there, but having a second post office with Greencastle in its name would be too confusing, the Postmaster General’s Office ruled, and Limedale it became.

A 1908 railroad map shows the town of Almeda partway between Greencastle and Fillmore, while the burg of Oakalla can be spotted in south-central Madison Township, undoubtedly near where the Oakalla Covered Bridge still stands.

But it was a county-by-county list of Indiana postmasters that emerged, like the Rosetta Stone in helping Tippin identify 49 post offices throughout the county,” which greatly helped in finding towns.”

That list “was like a gold mine when I discovered it,” Tippin said. “I didn’t sleep for a week when I found it, I was so excited.”

Turning to Carpentersville, Tippin noted that it was the largest community in north-central Putnam County in the mid-1800s, explaining that it had 218 residents according to the 1880 Census compared to only 86 for Roachdale at the time.

Carpentersville, located about three miles north of Bainbridge, was named in honor of Philip Carpenter, who was born in North Carolina but settled in Greencastle in 1827 before migrating to Franklin Township to operate a tannery and harness factory.

Platted Nov. 10, 1852 by James and Ruth Hedges and Samuel and Polly Osburn, Carpentersville had a post office from 1850 until 1910. An 1879 plat of the town showed a school, a couple of churches, a sawmill, general store and blacksmith shop in close proximity to the Louisville, New Albany and Chicago Railroad (which later became The Monon).

But a Nov. 10, 1879 fire at Picket’s sawmill devastated the town, destroying the mill and lumber yard as well as a dry goods store, Tippin said. And by the time it had recovered, Roachdale had picked up momentum and was in the midst of a building boom with 40 homes under construction at one time in 1880.

During his presentation, Tippin enjoyed sharing clippings from old newspapers, such as one about Carpentersville from the Daily Wabash Express on May 4, 1871. It oddly noted, “Four attempts have been made within the past few months to poison the family of Mr. Hall, near Carpentersville, Putnam County. It is supposed that these attempts have grown out of certain troubles in the church at that place.”

Next up was the community of Vivalia, a collection of homes along the Putnam-Parke county line about two miles north of Brunerstown. Never platted, “it does not show up on very many maps,” Tippin said.

One distinction for Vivalia was that it offered the only telephone exchange in the area with around 350 subscribers participating in the early 1900s.

In its heyday, Vivalia was considered the foremost fur-buying center in Indiana. The area was well known for a store owned by the Brattains, which operated until 1918. The establishment dealt heavily in furs trapped by Madison Township residents who were adept at trapping and trading skunk pelts to help keep food on their tables.

The fur phenomenon spawned one Vivalia legend involving “a wonder dog,” or so the story goes. An old newspaper article noted that its owner, “had only to show the dog a certain-sized skinning board and the dog would hustle out and bring back an animal just the right size for the board.”

But one day, the story continued, “the hunter’s wife chanced to walk in front of the dog with an ironing board. He jumped to his feet, ‘lit’ out for the woods ... and never came back.”

Tippin next turned his attention to Horntown, located in northeastern Cloverdale Township, five miles south of Belle Union, where the Horn Cemetery exists to this day.

Horntown had a post office from 1899 until 1901 but it was discontinued On Oct. 1, 1901 when Rural Free Delivery (RFD) was established and residents put up mailboxes to receive their deliveries along a 21.5-mile Cloverdale-based route serving 585 persons.

Tippin then shared a Nov. 27, 1915 Greencastle Herald article which noted that postmaster general was establishing a new system of mail delivery by automobile and Putnam County was being considered for it -- but here’s the kicker -- “Putnam County’s good roads attracted attention” for the new motorized rural route services replacing the horse and wagon system, the story noted.

It was another Greencastle Herald article from Oct. 7, 1913 Tippin shared that got the most reaction. It reads: “There has been an epidemic of scarlet fever in the Horntown school neighborhood ... and the school has been closed on account of the disease. This, like typhoid fever, was brought to Putnam County. A family moved from Spencer to Putnam County and their children were sent to the Horntown school. Shortly afterward approximately two-thirds of the pupils in the school had scarlet fever.”

Probably die in a small town; oh, those small communities ...

The second installment of Tippin’s tiny towns and vanished villages series is set for 6:30 p.m. Thursday, Feb. 28 at the museum, 1105 N. Jackson St., Greencastle. It will focus on Swanksville in Russell Township and Vettersville and Mill Creek Township which became part of Putnam County from Morgan County via a controversial legal battle.