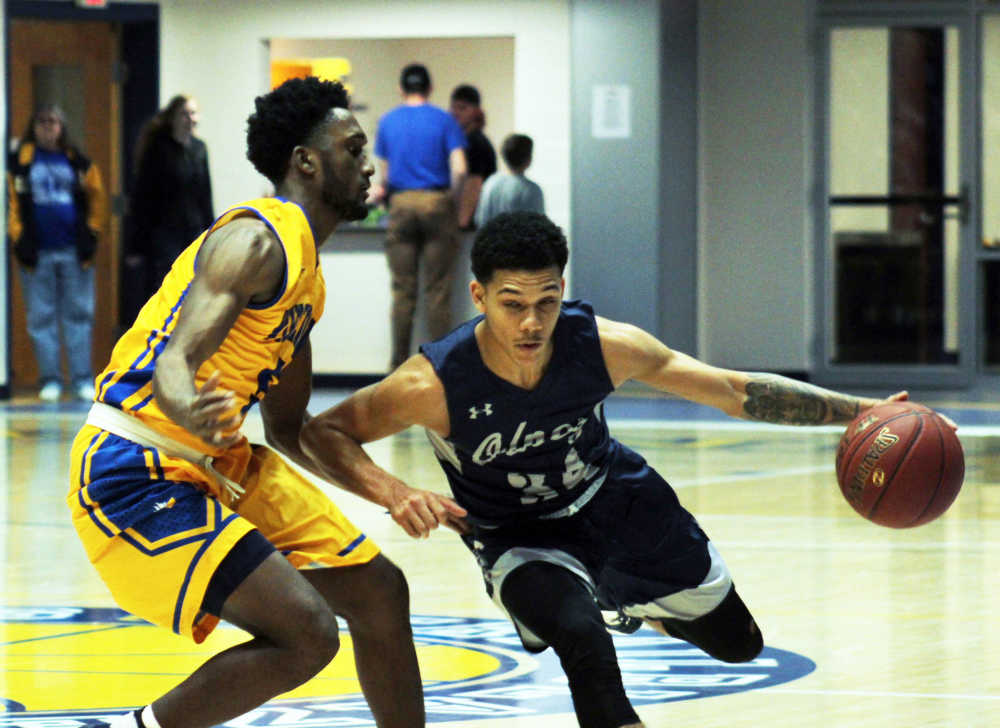 Cloverdale grad Jalen Moore goes to the basket against No. 1-ranked Vincennes in January.
Banner Graphic/JOEY BENNETT
Order this photo

While Jalen Moore and the Olney Central Knights were knocked out of the Region 24 tournament by eventual champion Kaskaskia, the Cloverdale graduate has picked up numerous post-season honors for his outstanding play.

Moore was named to both the All-Great Rivers Athletic Conference team and the All-Region 24 team, and was also one of five players on the All-Region team to be nominated for All-American honors.

OCC coach Mike Burris was pleased with the play of his freshman point guard, and looks forward to continued great things next year.

“Jalen had a great freshman season,” Burris said. “We gave him the keys from day one and it was a pretty smooth drive. We knew he was a winner and he showed that all season long.

“We look forward to him leading us next season as the best point guard in the nation.”

Moore finished as Olney’s leading scorer with 18.7 points per game, while also leading the team in minutes played with 29.1.

He shot 46.8 percent from the field, including 40.7 percent from 3-point range. Moore also hit 78 percent of his free throws and averaged 7.9 assists per game to 2.4 turnovers.

His scoring average was also 57th best in the country.

Olney Central finished ranked No. 26 in the country with a 25-6 record.

* Jay Scrubb, John A Logan (Player of the Year)

David Sloan, John A Logan (Player of the Year)

Jay Scrubb, John A Logan (Freshman of the Year)

In other post-season basketball action:

• Greencastle’s Nailah Ray and the OCC Lady Knights won their opening game in the Region 24 tourney by defeating Lincoln Trail 62-59, before being eliminated by No. 1-ranked Wabash Valley 99-59 in the semifinals.

Ray had four points and 11 rebounds against Lincoln Trail and added 13 points and four rebounds in her OCC finale.

• Cooper Neese of Cloverdale and the Indiana State Sycamores wrapped up their season with a 77-55 loss to Valparaiso in the Missouri Valley Conference tournament at St. Louis.

Neese closed out a strong freshman year with five points, hitting 2 of 7 shots from the field and 1 of 5 from 3-point range.

He finished the season third on the team in scoring at 8.2 points per game, shooting 40.1 percent from the field overall and 37.7 from 3-point range.

Neese was named the MVC newcomer of the week for the final week of the regular season, and was one of five players chosen to the All-Freshman team. 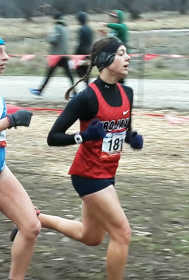 Coach Andy Lemons was excited to take members of the team to back-to-back championships.

“Shelby has had an outstanding race to finish out the year,” he said. “She has battled a lot over the last year and overcome some tough obstacles. I am very proud of her and am extremely excited to see what the future holds.”

Kallem was excited at the opportunity.

“Running at the NAIA Nationals was an amazing experience,” she said. “God has blessed me with a healthy season, an awesome family and friends to come out and support me. I met all my goals for this year, and now am excited for track season.”

Included with this story are the final wrap-ups from the fall sports season for Putnam County athletes competing in college.

Cumulative statistics are listed, when available, and in other cases the best available individual performance is included.

Clayton Wilson, So., Anderson – Ran third on the team in the NCAA Division III Great Lakes Regional at Shelbyville, finishing 169th in an 8K time of 27:51.8.

Shelby Kallem, So., Hannibal-LaGrange (Mo.) – Finished in 123rd place at the NAIA National Championships in a time of 19:46.

Maddie McHugh, Fr., Hanover – Placed 57th overall in the Otterbein Invitational with an 8K time of 31:59.7.

Mike Crossman, Fr., Hanover – Placed 57th overall in the Otterbein Invitational with an 8K time of 31:59.7.

Tyler Lotz, R-Jr., Marian – Earned second-team all-Mid-States Football Association honors as an offensive lineman. The offensive line allowed only seven sacks this season, which ranked first in the country and helped Marian’s ground game rack up 226.8 yards per game, which was 12th in the nation.

Jacob Meyer, Fr., Millikin – Played in one game and had one assisted tackle.

Lucas Lorian, Sr., Manchester – Made 12 solo tackles and had two assists. Had one quarterback sack, two tackles for loss, one forced fumble and two fumble recoveries.

Grady McHugh, Jr., Wooster – Played in three games, completing 5 of 7 passes for 31 yards with a longest completion of 10 yards. Also punted eight times for a 32.8 average, with a long punt of 53 yards. One punt resulted in a touchback, and two were downed inside the 20.

Sydney Secrest, Sr., Franklin – Played in 18 matches, starting 16. Had one assist and made four shots on goal.

Evan Crowe, Fr., St. Mary-of-the-Woods – Played in nine matches, starting six, with two goals and three assists. Made 12 shots on goal and had one game-winner.

Jed Fajt, So., Hanover – Team only played one fall match. Teamed with Jalen Simmons to defeat Oakland City 8-0 at No. 3 doubles.

Josh Stewart, Jr., Franklin – Had 5-1 record in six fall singles matches at a variety of positions. Also played six fall matches at No. 3 doubles with a 3-3 record.

Maggie Meyer, Fr., Marian – Played in 130 of 124 sets with 98 digs and 23 service aces. Team finished the season 30-7 and reached the NAIA National Tournament for the second straight season, winning their first-ever game at the final site in Sioux City.