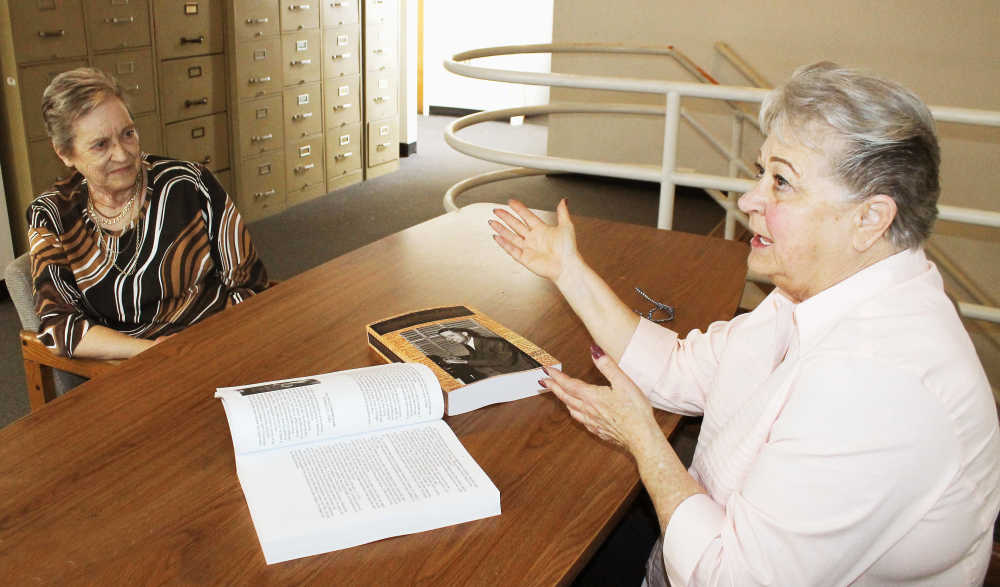 Anita McEnulty (right) details the labor of love that is “The David Barr Papers,” which she and sister Mary Ruth Jones discuss during a recent visit to the Banner Graphic office, from which their late father retired.
Banner Graphic/Jared Jernagan

In truly one of the most laboriously loving labors of love ever, the daughters of the late David Barr have published a two-volume set of the longtime Putnam County journalist’s personality pieces and Putnam Patter articles.

Barr daughters Anita McEnulty of Cloverdale and Mary Ruth Jones of Terre Haute started typing the first of 2,765 David Barr articles on July 21, 2015, setting a goal to complete their efforts by July 2018.

“We got done in March 2019,” McEnulty said as the sisters gleefully recalled that the great majority of those stories were initially typed by Barr on an old black Underwood manual typewriter, of which the family is still seeking the whereabouts.

“We had a lot of fun, a lot of headaches, a lot of heartaches,” McEnulty recalled of the more than 500 hours of typing for the project. “I think it brought us all (the family) together.”

That includes sister-in-law Janet Spencer Barr and cousin Tom Dewlen, who assisted with the typing and computer efforts on the book.

Compounding the creation effort, however was, both daughters losing a computer during the process. And that might easily have been expected given what Barr thought about an electric typewriter, let alone a computer as a word processor.

After all, the day the Banner Graphic got IBM Selectric typewriters as a 1980s newsroom upgrade, Barr quietly picked up the one off his desk, carried it into the nearby storage room and came back out with his trusty black Underwood, the identity of its individual keys lost to years of flying fingers on the keyboard.

“That was Daddy,” McEnulty said.

Volume 1 of “The David Barr Papers” contains the Putnam Personalities columns Barr wrote for the Putnam County Graphic starting in January 1948 and running until sometime in 1957.

“I typed most of the Putnam Personalities in the book,” Jones said, “and there were stories I have never heard.”

Those were weekly front-page stories with a photo. In the preface, the sisters note that “for Graphic subscribers, it was a guessing game from week to week” to see who would be the latest person profiled.

The articles are presented alphabetically by subject, starting with Zella Laverna Adams and ending with Leo O. Zieg. Volume 1 also includes a number of shorty Putnam County items gleaned from Barr’s Inn Town and Out columns. McEnulty and Jones lament not including an index of who and what is included, but hey, that’s part of the fun of this sentimental journey.

Volume 2 is comprised of a number of Barr’s Putnam Patter articles as well as a few opinion pieces and features. It was after Barr retired from Central Insurance in 1972 that he joined the Banner Graphic and remained on the staff as long as his health held out, which took his career into the 1990s.

Mr. Barr died in July 1997, and his daughters recalled him doing articles at least until 1992 when he remarried.

“He was an amazing man and we have a lot of good memories,” McEnulty said, noting that “it was nothing to see Daddy rip a paper out of the typewriter, wad it up and throw it at the wastebasket.”

Part of his daughters’ growing up was watching their dad work when they met up at the newspaper office after school.

“He always had a pen and paper in his pocket,” McEnulty recalled. “I can remember him sitting in church, tearing a piece off the church bulletin, writing something down on it and sticking it in his pocket.”

The cover of the book is a testament to how they remember him as well.

“We wanted this picture,” McEnulty said of the shot of David Barr, fingers poised at the keyboard. “This is what we grew up knowing.”

To create the cover, they took the photo of Barr, centering it on an old yellow paper of the Graphic.

The Barr family will get another chance to “talk about Daddy” and how they “chose the book to preserve some of the posterity of Putnam County” at an author’s talk event at 6:30 p.m. Wednesday, May 15 at the Putnam County Public Library. Books will be available to sign and sell.