Parker Black is inaugural Philanthropist of the Year 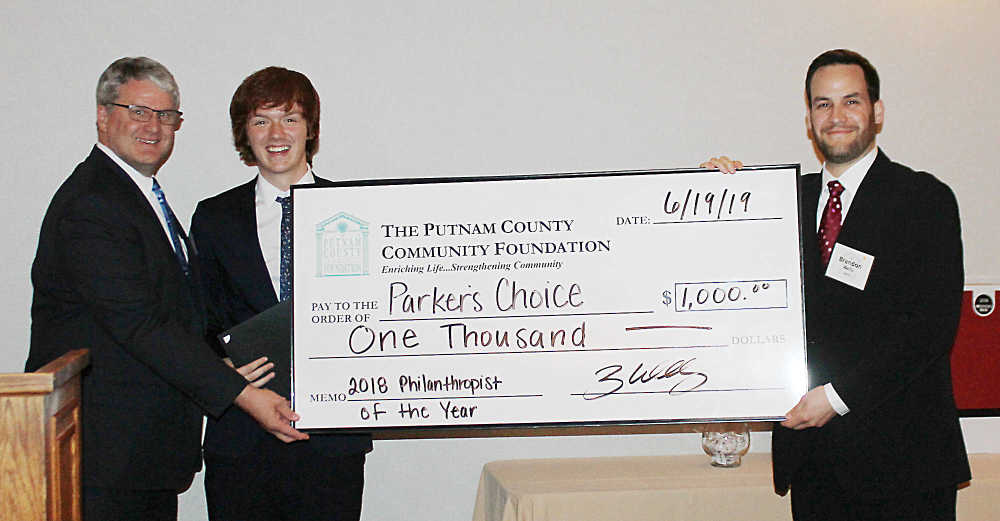 Having been surprised with the 2018 Philanthropist of the Year award from the Putnam County Community Foundation, Parker Black (second from left) receives a check to be made to the non-profit organization of his choice from PCCF Community Development Director Dean Gambill (left) and Executive Director Brandon Wells. The teen earned the award by doing something he enjoys, playing music and organizing a benefit concert for fellow students.
Banner Graphic/Jared Jernagan

Will the real Parker Black please stand up?

Is it the guy in shorts and sunglasses, playing guitar and singing Grateful Dead songs with his bandmates in tribute band Dreadful Greta?

Or is it the guy at the Inn at DePauw on Wednesday night, dapper in a navy blue suit and looking the part of the capital-P “Philanthropist” as he and two other besuited men held up an oversized check?

One of the lessons coming out of the annual meeting of the Putnam County Community Foundation Wednesday was that philanthropy takes a lot of forms, from the well-dressed guys holding the big checks to the young people doing the little things to help out their fellow students.

Observing one of those little things and turning it into a big thing is what earned Black the inaugural Philanthropist of the Year award from PCCF.

The story of Black and his effort Project Cultivate has been told before but it’s worth noting again. 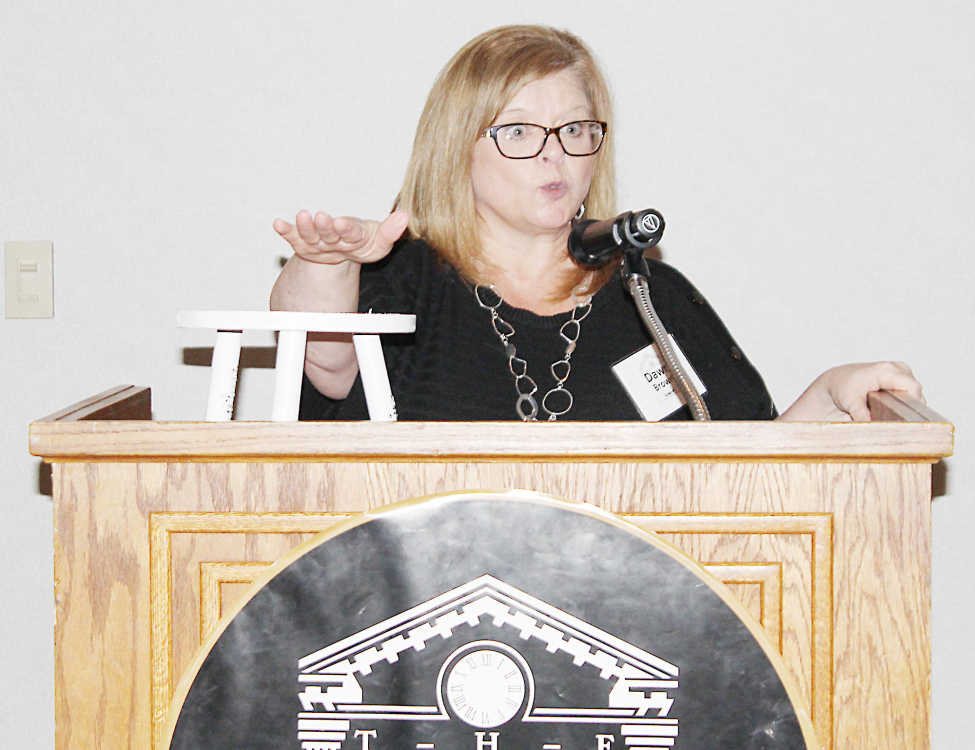 During his junior year, Black noticed that when students’ lunch accounts run short on funds, they are often given a nominal lunch of a graham cracker, a peanut butter sandwich, fruit or vegetables and milk, instead of a hot lunch.

This didn’t sit well with Black, and he wanted to do something about it.

What could a guitar-playing high school junior do for classmates running in short on funds? Black decided to organize a benefit show and Project Cultivate was born.

In that very first show, Black wound up raising $2,100 and donating it to Greencastle Community Schools to start a fund for his fellow students.

This spring, he expanded, donating to Cloverdale Community Schools to start a similar fund, as well as donating to the Mary Allison Children’s Trust, which meets student needs in other ways.

The award caught Black by surprise, who was apparently invited to the annual dinner under other pretenses. He was simple in his thanks, but did share a bit about his hope for the future of the project.

“Luckily I’m going to DePauw so hopefully I get to continue it for another four years and then some,” Black said.

While Black may have musical dreams, his focus at DePauw will be different, as he plans to study economics and management.

He told the Banner Graphic prior to the concert this April that he wants to make Project Cultivate more official by incorporating.

“It’s sort of growing into a thing,” Black said. “In the coming months, we’ll be incorporating as a non-profit.”

At the end of four years, Black said if he doesn’t have a musical career, at least he’ll have the chance at a “grown-up job” and a track record of helping others.

It’s precisely the kind of energy that has PCCF Executive Director Brandon Wells excited not only for Black’s future, but for the community’s

“Let’s keep an eye on this younger generation because they’re doing some big things,” Wells said.

Giving the inaugural award to a teenager may not have been what the foundation had in mind when it planned the new award. Wells emphasized last month that it is not a lifetime achievement award, but focused on 2018 alone.

As part of his recognition, Black was presented with an oversized $1,000 check made out to the non-profit of “Parker’s Choice.”

Black isn’t the only young person who has Wells hopeful for the future. Also honored Wednesday were the graduating seniors from the Youth Philanthropy Committee — referred to as the “fun committee” several times by the adult board members.

Parmley spoke on behalf of is fellow seniors, reflecting on the two main things he gained in two years on the committee.

“First, I met some amazing kids from the surroudning schools, leaders from North Putnam, South Putnam, Cloverdale,” Parmley said. “Second, philanthropy is a lot more than just giving to not-for-profits.”

He spoke of the three Ts of philanthropy -- giving of time, talent and treasure.

Not only was Parmley a member of the Youth Philanthropy Committee, he is the 2019 Lilly Community Scholar, a program administered by PCCF.

Parmley wasn’t the only person to speak of a three-part approach to philanthropy, as keynote speaker Dawn Brown gave spoke of how she looks at community foundations as three-legged stools.

As Brown, the director of the Grant County Community Foundation for the last 15 years, assembled a literal stool, she explained that the three things a community foundation must do: Serve donors. Serve non-profits. Serve as a catalyst for change.

“When you do all three of these things really well,” Brown said, “you have a stool that’s sit-worthy.”

Brown emphasized that all donors must be served, recalling a day in which a 10-year-old brought $7 to her office in the morning to support his favorite charity. Later that afternoon, she went to a local factory to accept a check for $400,000.

In terms of serving non-profits, Brown explained that the foundation must relish its role as the sidekick.

“All the things that are great, that you love about Putnam County,” Brown added, “it’s because you have great relationships with non-profits.”

Finally, Brown spoke of being a catalyst with an eye to the future.

“I think we sometimes forget to love where we live,” Brown said. “A lot of times we put things off, saying we’ll donate later when we have the money.”

But much like a couple saying they’ll start a family when they have the money, that day never comes.

“If we want to be a catalyst for change, we have to start giving now,” Brown said.

In a room full of people who are already generous givers, Brown expanded her advice to include planning for the community’s future.

“Whatever you’re thinking of tackling, you have to start now,” Brown said.

That future is going to include GIFT VII, an initiative by the Lilly Foundation that was mentioned a number of time Wednesday.

“With any luck, what GIFT VII will do for us is it will get us to focus more on this three-legged stool,” Brown said.

GIFT VII is the seventh phase of the Lilly Foundation’s Giving Indiana Funds for Tomorrow (GIFT) initiative. The endowment has allocated $125 million to help Indiana community foundations strengthen the towns, cities and counties they serve.

Here in Putnam County, it means that gifts to unrestricted funds will be matched two-to-one by the Lilly Foundation.

While there is more to the GIFT VII, it will mean a desire by the foundation to raise even more money when those donations will be tripled.

“So if you want to donate and you don’t know how, ask me.” Gick said, “Ask someone else on the board. Ask the staff.”

New board members approved during the meeting include Kyle Beasley, Jennifer Jackson and Marianne Savage.

Veteran board member Vivian Whitaker was also honored as an honorary board member, which will keep her involved even with her six years now at an end.

“It’s been my honor to serve as a foundation board member for six years,” Whitaker said. “It’s gone really, really fast.”