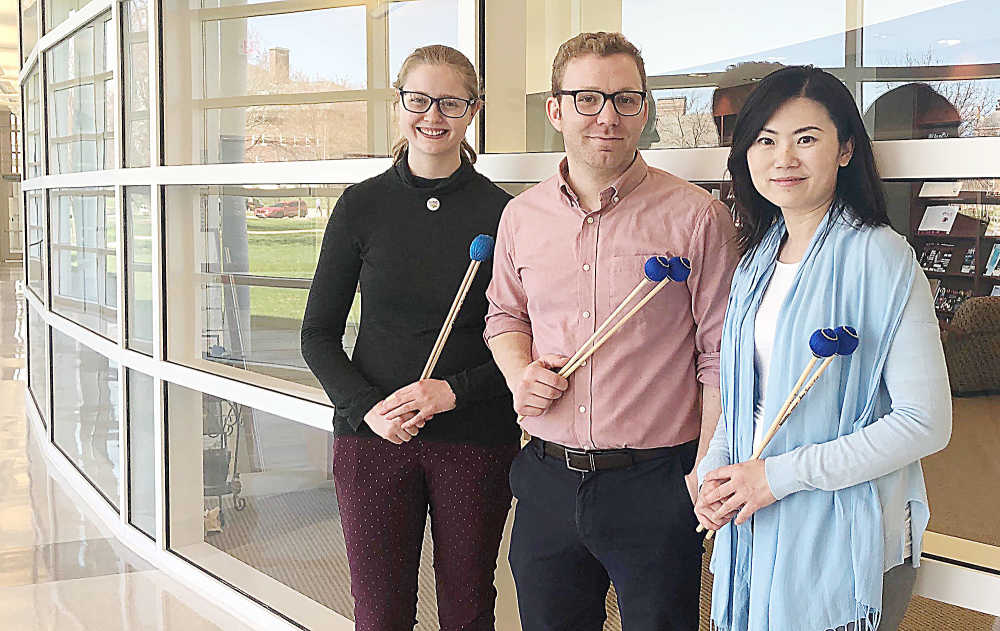 Percussion Group DePauw will create a fascinating and engaging sonic landscape on Wednesday night at 7:30 p.m. as the Greencastle Summer Music Festival continues its series of free concerts in the air-conditioned comfort of Gobin Memorial United Methodist Church.

The members of Percussion Group DePauw, which include Ming-Hui Kuo, Ben Hogan and Abigail Foehrkolb, are professional percussionists who work at, have graduated from or are current percussion major students at DePauw University.

“This is always one of my favorite concerts of the year,” says Eric Edberg, the recently-retired DePauw music professor who founded the festival in 2005 and continues as its artistic director. “The array of sound colors is as extraordinary as the array of visual colors in the sanctuary’s stained glass windows. And these energetic performers, at the top of their game, are consistently amazing.”

The festival, dedicated to “bringing the community together with friends making music for friends,” is made possible by donations from local individuals, an endowment through the Putnam County Community Foundation, a grant from the Putnam County Convention and Visitors Bureau and support from local businesses, including Bridges Craft Pizza and Wine Bar (which supplies intermission refreshments), The Inn at DePauw, Greenburg Accounting and Hillside Farms.

The festival continues on July 24 with an evening of traditional and contemporary gospel music and spirituals featuring Christian artist Jason Powell.

Ming-Hui Kuo, the group’s founder and DePauw’s percussion professor, studied percussion with Pei-Ching Wu and Tzong-Ching Ju, and was an intern member of Ju Percussion Group from 1993 to 2002. During her time with JPG, she performed in over 500 concerts and hundreds of music-related activities. Her international appearances with JPG include performances in Taiwan, China, Japan, Malaysia, Singapore, Hong-Kong, Macao, Spain, Hungary, Australia, Canada and the United States.

Kuo co-founded the Butterfly Percussion Quartet with Pei-Ching Wu in 1999 and the XPlorium Chamber Ensemble with Nathan Nabb in 2011. She earned her Doctor of Musical Arts in Percussion Performance in 2012 from the University of Kentucky as a student of Jim Campbell. Prior to her appointment to the music faculty at DePauw University, Kuo was adjunct professor of percussion at Morehead State University in Morehead, Ky. from 2007 to 2014.

An active and versatile drummer, percussionist and educator, Ben Hogan blends his background in western percussion and drum set with his interest and study of world percussion. Creating a unique sound, he draws from an array of rhythms, concepts and instruments, such as the pandeiro, cajón and tabla, into his playing, forging a distinctive individual style.

As an educator, Hogan has previously been on the faculty at the University of Wisconsin-Green Bay, UWGB Summer Music Camps, Music for the Sake of Music (Green Bay, Wis. and White House of Music (Wauwatosa, Wis., and has done educational residencies and master classes throughout the region.

Hogan is an in-demand performer in a diverse array of playing situations including jazz, rock, country, Brazilian choro, gypsy jazz, free improvisation and musicals. He appears on recent album releases such as “A Mandolin Journey” by the Carlo Aonzo Trio (Italy), “Contrafacts” by Anderson Pessoa (Brazil) and “Raised This Way” by Colton Chapman.

Abigail Foehrkolb grew up in St. Louis, Mo., where she began studying percussion at age 12. She has studied with Martin Weir and Erin Elstner, and currently studies with Ming-Hui Kuo. Before arriving at DePauw, Abby was a member of the St. Louis Symphony Youth Orchestra, as well as a participant in the E. Desmond Lee Honor Band for six consecutive years. She performed an arrangement of the popular tune “Classical Gas” as a marimba solo with her high school’s band in 2017, earning her an outstanding soloist award at Festival Disney. She was also the recipient of Birch Creek’s 2016 Outstanding Piano/Percussion/Harp Student Award and Scholarship.

She is currently a member of the DePauw University Orchestra, Band and Percussion Ensemble. Since coming to DePauw, Abby has participated in IMEA’s Intercollegiate Honor Band, Percussion Group DePauw’s performance at the Greencastle Summer Music Festival, the DePauw Chamber Symphony’s Japan tour and has played in master classes with She-e Wu, Naoko Takada, Tom Sherwood and Marc Damoulakis. In April, Abby was a winner of the DePauw University Concerto Competition, and has been accepted into the 2019 Collegiate All-Star Percussion Ensemble of the Percussive Arts Society, with which she will perform with other percussionists from across the United States at the Percussive Arts Society International Convention in Indianapolis this November.