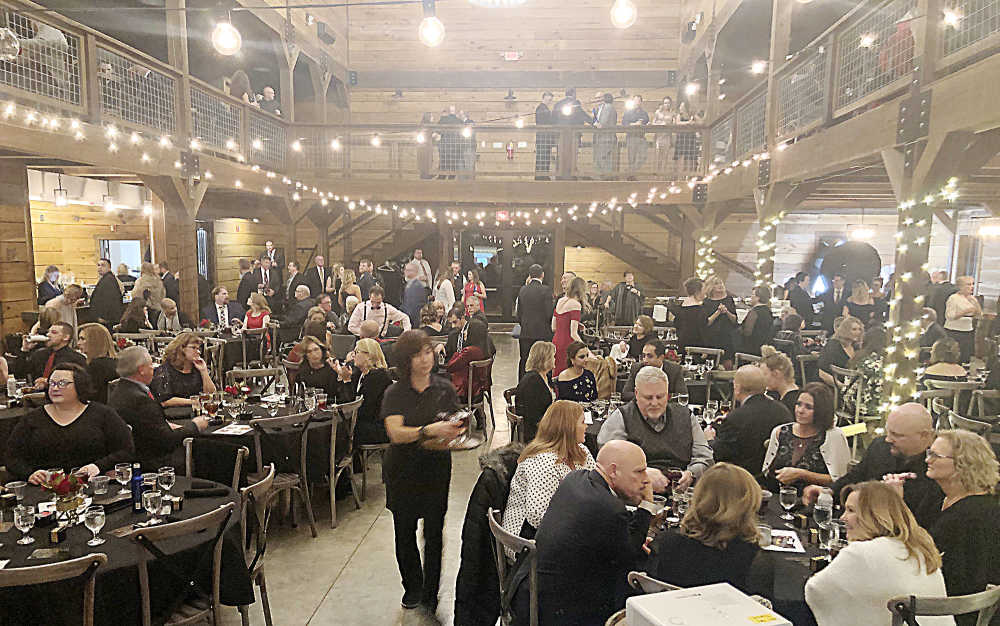 And while the fancy dress, cocktails, good food and overall sense of merriment were good enticement to get out on a cold November evening, there was something more important afoot in the woods of Madison Township.

The real point of the evening was to raise funds for the Putnam County Cancer Center and specifically for a medical transportation program the hospital will be implementing.

Hospital CEO Dennis Weatherford spoke of how PCH is able to provide a number of services on site but when a patient needs something like radiation treatment, for example, it can take quite a toll.

“A lot of our patients don’t have the resources to get back and forth to those treatments,” Weatherford said, “not just the financial resources, but the friends and family to take them.”

With that in mind, Weatherford announced the hospital’s first partner in providing the transportation service to its patients.

“York Automotive Group is our first community sponsor for actually getting our medical transportation off the ground,” Weatherford said, The vehicle will be sold and serviced by the Greencastle General Motors dealership.

The project remains in the planning stages, with more details to be announced at a later date.

To display for donors exactly what they were supporting Saturday evening, the hospital also invited some guests to speak, including Dr. Sameer Ahmed, representing St. Francis Physician Network, which has partnered with PCH for the last four years to provide oncology and hematology services at the Cancer Center.

After speaking of the honor he felt it has been to work with PCH, Ahmed moved on to the services provided at PCH, including surgeries, clinical trials, chemotherapy and other services.

“We want them to get the best treatment without going anywhere else,” Ahmed said.

However, in cases such as radiation — a five-day-a-week commitment for six weeks — they must go out of town, resulting in what Ahmed called “a logistical nightmare.”

For cases like this, Ahmed said St. Francis is pleased to support the effort to bring medical transportation to the hospital.

“We are excited to help Putnam County Hospital in the effort to raise money for transportation,” Ahmed said.

After Ahmed came testimonials from a pair of patients who helped put a face on exactly what goes on at the Cancer Center.

Via video, Marlene Hurt spoke of her struggle with back pain and a fractured arm that turned out to be caused by multiple myeloma, a blood and bone cancer. Working with Dr. Ahmed, Hurt was prescribed oral chemotherapy and her mobility increased greatly in just a few monts.

“Now I don’t have to use my canes,” Hurt said. “I feel so good sometimes I want to dance a jig, but Doc tells me I should be careful that I don’t break any bones.”

Saying she could not believe how far she’s come, Hurt spoke of the simple things she’s glad she can do now.

“A lot of people don’t get excited about being able to do yard work, but this summer I’ve been able to work in my flower beds, which is what I love to do,” Hurt said.

Finally, Hurt spoke of the value of being able to have these services right here in the community.

“I like coming here to Putnam County because it’s like five or 10 minutes to get here to the hospital,” she said. “And their staff is wonderful — they know all their patients and are very caring in what they do.

“Dr. Ahmed is very good. He really cares about his patients and is good at explaining what I can expect,” Hurt said.

Learning from Ahmed that her life expectancy was much longer than the one year she had in mind, Hurt got a different perspective on the future.

“So I decided I better get busy doing things because he told me I was going to live,” Hurt said with a laugh.

“And so far he’s been right,” she added with a catch in her voice. “I feel better every day.” 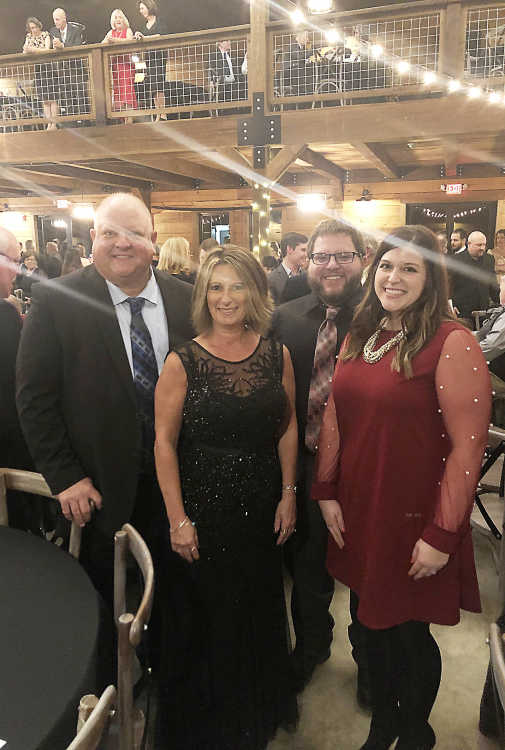 Kevin Cox shared his story both through video and in person on Saturday.

The local farmer had a spot on his chest that wasn’t going away. He asked his family physician, Dr. Keith Landry, to check it out, assuming it would be nothing. However, Cox found himself going through a mammogram, “which is a little unnerving for a guy.”

Even so, Cox managed to find some levity in the situation when the techs performing the mammogram asked him how he was doing.

“I told the ladies, ‘Good. I haven’t been handled like that since I took myself to prom.’”

Once the roar of laughter at the gala died down, Cox gave some advice: “You have to laugh, folks.”

When it turned out, after a mammogram and two ultrasounds, that the spot was malignant, the radiologist was slightly taken aback when Cox immediately asked what to do now.

“Well I teach an adult Sunday school class,” Cox said. “And I was just telling them yesterday that it’s not my place as a Christian to ask God why things happen but it’s my place to say, ‘What do we do now?’”

The “what now” turned out to be more tests and eventually a mastectomy with Dr. Keith Thomae followed by chemotherapy with Dr. Ahmed.

Besides the technical know-how of the doctors, nurses and other staff members, Cox spoke of the overall caring environment he found at PCH, including having a nurse during chemo who had gone through the same thing.

“This is our hospital,” Cox said. “My wife worked here for 26 years. When we need something done, we go here.

“I don’t understand why anyone would go anywhere else,” he added. “It’s here, it’s local. The people are caring.”

Cox went on to speak of how cancer seems to affect every family.

“It’s hard to find a family today that hasn’t been affected by cancer,” Cox said. “And I would much rather it be me that has that than my wife, my daughters or my son.”

Knowing that cancer is bound to touch other families, Cox recommends staying local.

“I hope none of you ever get (cancer),” he said, “but I recommend Putnam County Hospital if you do.”

With the heartstrings of guests thus tugged, the event moved into the live auction portion of the evening.

Auctioneer Jeff Rich then did what he does best and began the live auction, consisting of a weeklong trip to Belize, a week trip to Thailand, Dinner with Dr. Alawaht, lawn care items from Humphreys Outdoor Power, a La-Z-Boy from Furniture Awarehouse, Fourth of July in Nashville from Barrier Windows and cooking lessons at the new BreadWorks Bakery and a pair of “live” paintings from the Bearded Painter.

Rick Johnston, The Bearded Painter, had been onstage throughout the evening, preparing a pair of paintings of winter landscapes. At night’s end, both were auctioned off, bringing in a total of $1,275 between them.

A silent auction had taken place during the social hour prior to dinner, with more than 70 items donated by local companies and individuals, including gift baskets, Pacers tickets, professional baseball packages from the Cardinals and Reds, a wagon full of toys and much more.

Dinner was catered by the Putnam Inn.

The evening wrapped up with the Prime Real Estate after party featuring live music from 15th and Hulman. 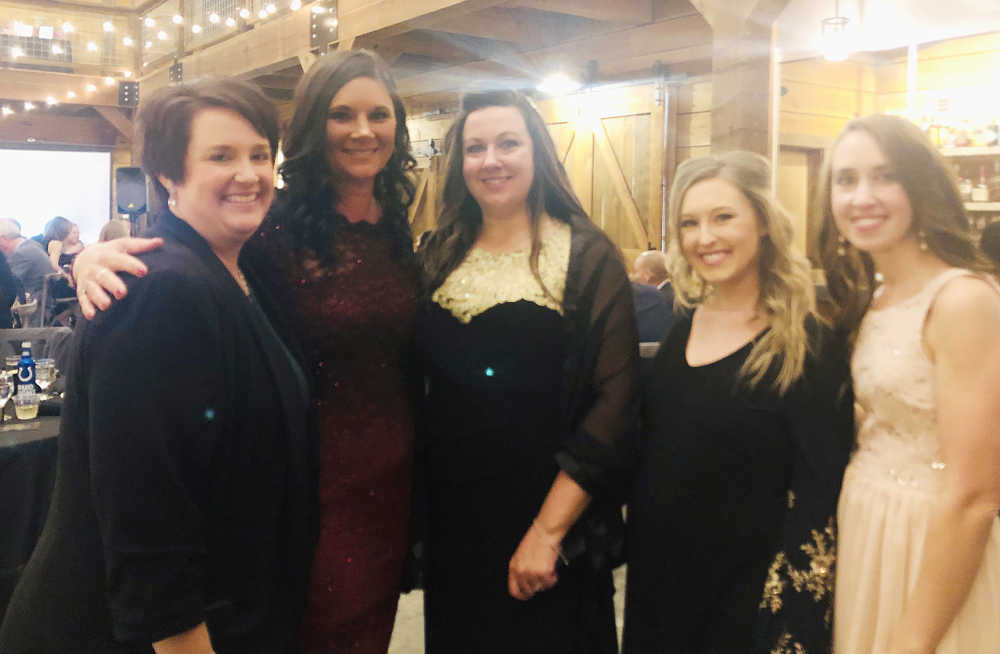 PCH Director of Marketing Brooke Trissel thanked the more than 280 attendees as well as the volunteers, giving special recognition to Janet Horton and Brooke Plummer for all of their hard work in helping plan the event.

“We could not thank our community and sponsors enough for another successful event. The Bearded Painter added such an entertaining piece to this year’s gala, Jeff Rich was amazing as always and what an incredible group of volunteers from PCH I had here to help,” she continued. “It is amazing to see so many people come out for such a great cause. We are excited to see what the 2020 Gala brings.”