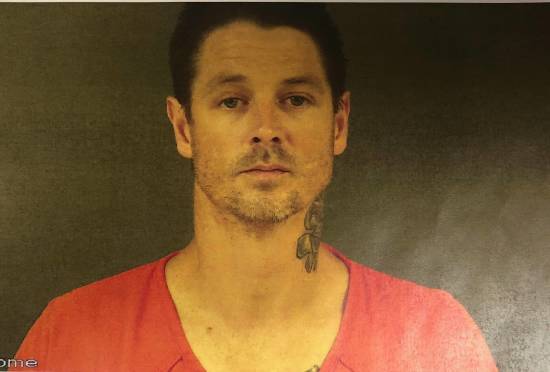 REELSVILLE -- The manhunt for a Greencastle man wanted in two counties continued Wednesday evening following a pair of vehicle crashes and a stolen truck.

Brown is a white male, 6-feet-4-inches tall and 195 pounds. He has brown hair, green eyes and a large tattoo on the left side of his neck.

He was last seen in the area of Croy’s Creek Christian Church in southwestern Washington Township.

Anyone with information on Brown’s whereabouts is asked to call Putnam County Dispatch at 653-5115, ext. 0.

Residents are also advised not to approach Brown and should consider him armed and dangerous.

Putnam County Sheriff’s Department detectives obtained information that Brown would be at a residence in the area of Seminary and Vine streets in Greencastle.

Working undercover, the detectives had the location under surveillance when Brown arrived at the location around noon on Wednesday.

When the deputies attempted to stop Brown and take him into custody, he fled the scene in his pickup truck and a vehicle chase ensued.

Brown first led police down multiple city streets before fleeing westbound out of the city on West Walnut Street, later fleeing down Creek Road into the area of Oakalla Covered Bridge.

The suspect then continued on the road as it curved back to the north, becoming Saddle Club Road, which was actually closed for work on the bridge over CSX railroad.

Crews were present working on the bridge, but Brown drove on, crashing the vehicle into the ditch and consequently blocking the pursuit of the deputies.

He then allegedly jumped out of his vehicle and stole one of the construction trucks.

An officer later located Brown again, pursuing him south out of Madison Township and into southwestern Washington Township.

In the area of Croy’s Creek Church, Brown abandoned his vehicle and fled on foot into a wooded area.

Officers continued a manhunt in the area into Wednesday evening, with only one sighting of Brown since. Multiple other agencies assisted with the search, including a helicopter from the Indiana State Police.

Early in the original pursuit, Deputy Kyle Lee was involved in a multi-vehicle crash in front of the Greencastle Post Office.

Lee was westbound on Walnut Street (in a block in which the street is eastbound only), approaching Vine Street when he saw a northbound vehicle approaching the intersection.

The other vehicle was not required to stop, so the deputy attempted to avoid the crash. However, he collided with the front of the first vehicle before leaving the north side of the road, hitting a small wall at the edge of the city parking lot as well as two parked vehicles. Debris from the crash also struck a fifth vehicle.

Neither Lee nor the other driver is believed to have suffered serious injury in the crash. No occupants were in the parked vehicles.

The Greencastle Police Department, which is investigating the crash, has not released any further details.