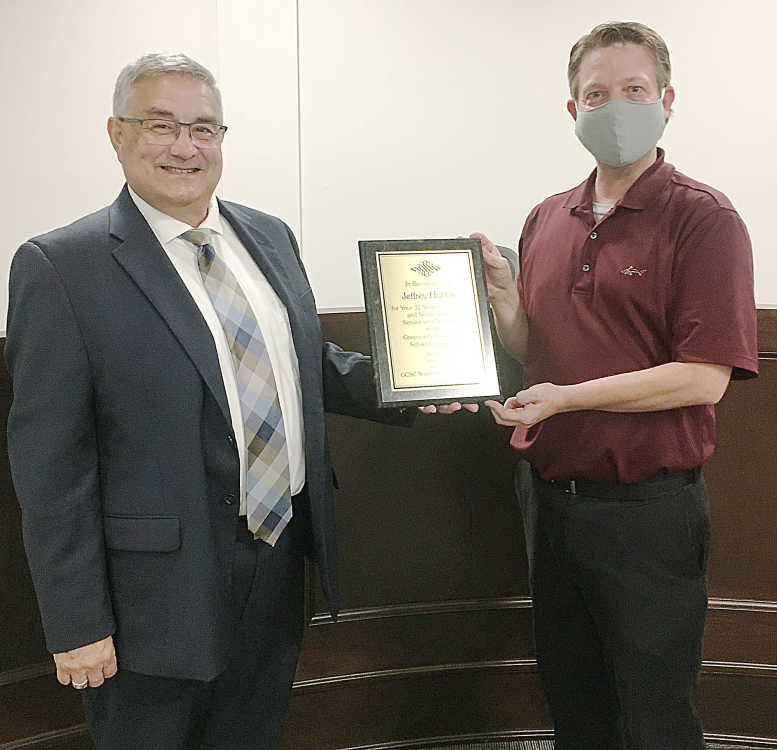 On the occasion of his final school board meeting, Greencastle Superintendent Jeff Hubble receives a plaque from school board member Brian Cox.
Courtesy photo

It isn’t often a school board bids adieu to a superintendent and a veteran board member in the same meeting.

However, toasting retiring Supertintendent Jeff Hubble and board member Bill Tobin was far from the only feting going on at Monday’s meeting of the Greencastle School Board.

The board actually recognized eight retiring employees who, Hubble noted, have combined for more than 200 years of service to the education field.

“Many of us will continue to be contributing to the brain trust and cheerleading for the Tiger Cubs and wearing purple,” Hubble said, “but we won’t be getting paid for it any more.”

Longtime board member Dale Pierce noted that it was a somber occasion to honor Green, who had already announced his June 30 retirement before he passed away last Thursday.

“We certainly miss Dan at his passing and thank him for his years of service,” Pierce said. “He was a good friend.”

“Jeff, we really appreciate the seven years you’ve spent in Greencastle,” White said. “You’ve been a fantastic asset to the school corporation.”

For his part, Hubble, who had been a middle school principal prior to coming to GCSC as assistant superintendent, reflected fondly on his tenure.

“Thank you for the last seven years,” Hubble said. “It’s a great place to wrap up 32 years.”

Fellow board members also acknowledged Tobin’s contribution to the board, who spent six years on the board in two separate stints.

“I know Bill’s not one for a lot of fanfare so I’ll just say thank you and leave it at that,” White said.

Noting that Tobin had served in the U.S. Navy and he was in the Marine Corps, Pierce stood to salute his fellow veteran.