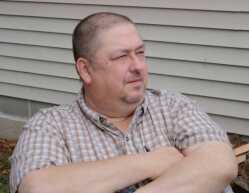 David worked at the Putnamville Correctional Facility for 30 years, retiring in 2013. He had previously owned and operated Wells Stop-n-Shop and worked at Gould’s Market.

He enjoyed fishing, watching NASCAR, IndyCar racing and spending time with his grandsons.

He was preceded in death by his parents; father and mother-in-law Howard and Mary Dean; brothers-in-law William “Bill” Dean and Mark McFarland; and several aunts and uncles.

Graveside services will be held at 11 a.m. on Saturday, July 18 at the Blakesburg Cemetery, Fincastle, with interment to follow.

Memorial contributions may be made in memory of David to the American Diabetes Association, 7363 E. 21st St., Indianapolis, IN 46219.