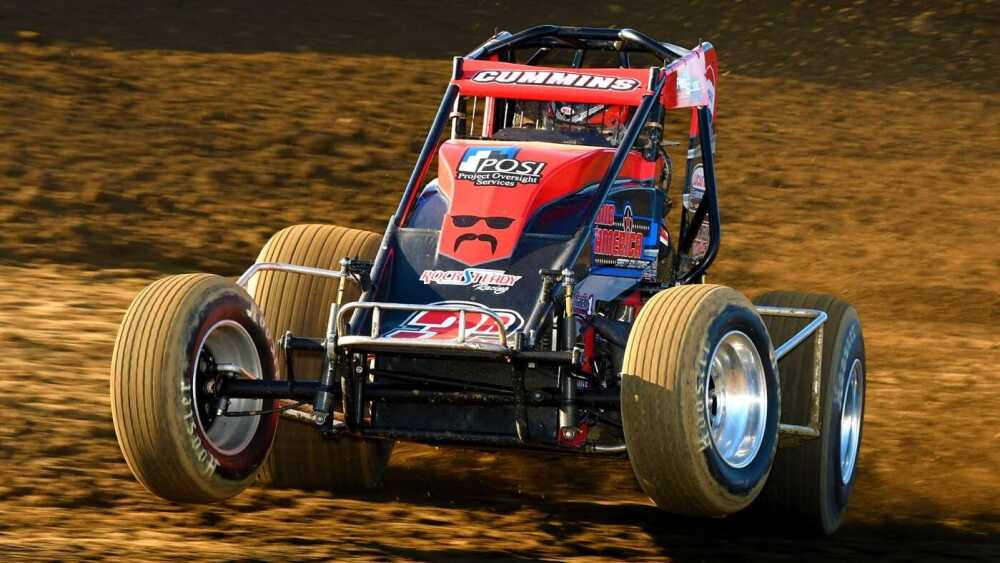 PUTNAMVILLE -- Lincoln Park Speedway made its debut on the NOS Energy Drink Indiana Sprint Week schedule in 1988, the first year of the series when it was a five-race championship for winged sprint car racing.

These days, on this occasion in mid-summer, Indiana Sprint Week at Lincoln Park is home to the best of the best from USAC’s AMSOIL National Sprint Car division. For years upon years, many of the most memorable ISW moments and races can lay claim to have taken place at the 5/16-mile dirt oval.

One year ago, on a night when the lights went out around Lincoln Park Speedway, Kyle Cummins (Princeton, Ind.) was “lights out” in his performance, leading from start to finish and wiring all 30 laps from the pole to win. It remains his only top-five finish at LPS during his ISW career.

Shane Cottle, a recent USAC Sprint winner at Lincoln Park on July 3, nearly won Lincoln Park’s ISW race in 2012, leading 26 of the 30 laps before finishing 4th for his best result in the event. The Kansas, Illinoisan took 7th in 2014 and 2016 and was 9th most recently in 2019.

Brady Bacon captured the victory on night two of LPS’ Bill Gardner Sprintacular on July 4 at LPS with the Broken Arrow, Oklahoma driver charging from the 8th starting position to victory. The 2016 ISW champ was victorious in his 2015 LPS ISW trip and 2nd in 2019, plus 6th in 2013 and 9th in 2014. Twice he has recorded the fast qualifying time in the event in the years of 2014 and 2018.

Chris Windom (Canton, Ill.) has also declared victory at Lincoln Park in 2020 during June’s USAC NOS Energy Drink National Midget show during Indiana Midget Week. A similar winning effort has yet to come to fruition for the two-time ISW champ in 2011 & 2018 champ who earned his best LPS finish of 2nd that same year. Windom took 5th in 2013, plus an 8th, 9th and 10th in the odd numbered years of 2015-17-19, respectively.

If you’re into even more number games, every three-year span seems to be Robert Ballou’s year at Lincoln Park during ISW. His 2014 and 2017 victories mark two his three USAC Sprint wins at LPS. The mind ponders what ISW 2020 at LPS will bring for the 29-time USAC National Sprint Car feature winner. At LPS ISW, the 2015 Indiana Sprint Week titlist’s performances have been solid with a 4th in 2016, 6th in 2015 and 7th in 2013.

Fort Branch, Indiana’s Chase Stockon has five top-tens to his credit during ISW at LPS. He finished 10th thrice in a three-year span between 2013-14-15 before collecting a best of 2nd in 2016 behind winner Brady Short. Stockon also earned a 9th in 2018. Lincoln Park was the location that Stockon made his USAC debut for his now full-time team on the tour, KO Motorsports, which occurred during the two-night tilt in the month of July.

Brent Beauchamp (Fairland, Ind.) and Shane Cockrum (Benton, Ill.) are the two Lincoln Park Sprint Car track champions represented in the 48-car field on Thursday. Beauchamp, the 2012 & 2017 LPS champ and one-time ISW winner at Bloomington, was the fastest qualifier in USAC Sprint competition at LPS in July, his first fast time with the series in eight years. He ran 9th in 2013 for his best LPS ISW result. Shane Cockrum, meanwhile, a three-time USAC Silver Crown winner, has been a standout on a weekly basis in the LPS Sprint Car division, winning track titles in 2016-18-19.

USAC AMSOIL National Sprint Car point leader Justin Grant (Ione, Calif.) has finished inside the top-five just once in the past decade of ISW visits to LPS, a 5th in 2018. He also finished 6th in 2017 and 8th in 2019 at the event. His 2nd and 3rd place runs in his two Lincoln Park USAC Sprint starts this year were the best of his career at the track.

A.J. Hopkins (Brownsburg, Ind.) is a towering presence at Lincoln Park with numerous weekly wins over the past several seasons. He ran 3rd at LPS during ISW in 2018 to go along with a 2nd earlier that same month.

Carson Short (Marion, Ill.) rolled a pair of sixes in both the 2018 and 2019 event while C.J. Leary (Greenfield, Ind.), a winner at Kokomo and Lawrenceburg during rounds two and three of this past weekend's ISW was a 7th and 3rd place finisher over the last two years at LPS ISW in 2018 and 2019. Brandon Mattox (Terre Haute, Ind.) had a successful 7th in 2019. Jadon Rogers (Worthington, Ind.), who recently took over the wheel of the Randy Edwards No. 61m after June Haubstadt, Ind. USAC winner Stephen Schnapf stepped out of the ride, was the fastest qualifier with USAC on July 3 at LPS, his first career quick time with the series.

Tickets for all Indiana Sprint Week events are available while supplies last, exclusively at www.usactickets.com. Adult general admission tickets for Lincoln Park are $25 while kids age 10 & under are free. Pit passes are $30 apiece.

All online ticket purchasers will be allowed an early 3:30pm (local time) entry into the grandstand. Front gate entry is open to all spectators at 4:30pm. Hot laps begin at 6:30pm with racing to immediately follow.

Spectator tickets for all of the 33rd annual edition of ISW are also on sale at www.usactickets.com. ISW tickets will be sold exclusively online and there will be a limited availability based on COVID-19 criteria that is in place at each venue on the schedule for all ISW event throughout the Hoosier state. There is no guarantee of on-site ticket sales at any of the tracks if pre-determined attendance limits are met beforehand.

All seven ISW races will be aired live on FloRacing at https://bit.ly/2ZpafUr.

17 DAKOTA JACKSON/Elizabethtown, IN (On The Gass Racing)

20B JAKE BLAND/Bloomington, IN (Jake Bland)

All events live on FloRacing at https://bit.ly/2ZpafUr.