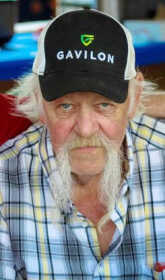 True grit. It is not a word you hear very often. To have grit means you have courage, passion and perseverance. Herschel Edwin Riggle worked to maintain such a persona. His code of honor would be tested when challenged in a duel.

On July 30, 2020, at the age of 69, equipped to aim with precision and a quick draw, Herschel peacefully lost his 27-month confrontation with a most despicable criminal by the name of cancer. Although cancer attempts to break the threads that hold you, Herschel being very stubborn set out to prove his doctors wrong by not letting his pain define him, shatter his hope, destroy his confidence or cripple his love.

Herschel, more formally known by some as Raccoon, Indiana’s self-appointed Mayor, Chief of Police and Dog Catcher, was born May 5, 1951 and immediately dubbed the favorite child by Joseph and Roseanne (Clark) Riggle of Roachdale and his surviving sisters Charlotte (Steve) Bell, Beverly (Bob) Vincent and Mary (Kevin) Stokes.

Herschel was preceded in death by his parents and three brothers (Robert, Joseph and James Riggle).

A master storyteller equipped with a sharp tongue and witty sense of humor, Herschel didn’t know a stranger. His children Lynn (Terry) Scott, Brandy (Chris) Muse, Harv (Katie) Riggle, as well as his seven grandchildren, one great grandchild and all those that crossed his path along his truck driving journeys, would learn tall tales are only stories if you can’t make people believe them.

Herschel would later remain a devoted daily contributor to solving world problems and keeping up to date on hometown happenings at his local Casey’s among the many other opinionated coffee drinkers, several of whom he considered longtime friends. Upon retiring, weather permitting Herschel most often could be found bailing hay or chasing rebel cattle if not fishing or mushroom hunting. Not in that particular order.

Herschel would teach his family many valuable lessons during his 69 years, among them always keep your powder dry, and it doesn’t matter if it is through the truck or kitchen window, always take the shot. He lived daily by the basic philosophy: You don’t get what you wish for, you get what you work for, and in the meantime stay the hell out of the way.

Herschel’s big heart often overshadowed his tough demeanor as evidenced by the manner in which for many years he and Barbara Twitty kindly shared the home in which they lived. Herschel was admired for his generosity and hospitality by all that knew him.

Friends are welcome to visit with family at Servies and Morgan Funeral Home, 102 E. Washington St., Roachdale, on Sunday, Aug. 9 from 11 a.m.-2 p.m.

Numbers in attendance may be regulated and social distancing is expected to be followed. Servies and Morgan Funeral Home adheres to mask requirements.

You are invited to visit www.serviesmorgan.com where you may leave an online condolence or share a memory with the family.