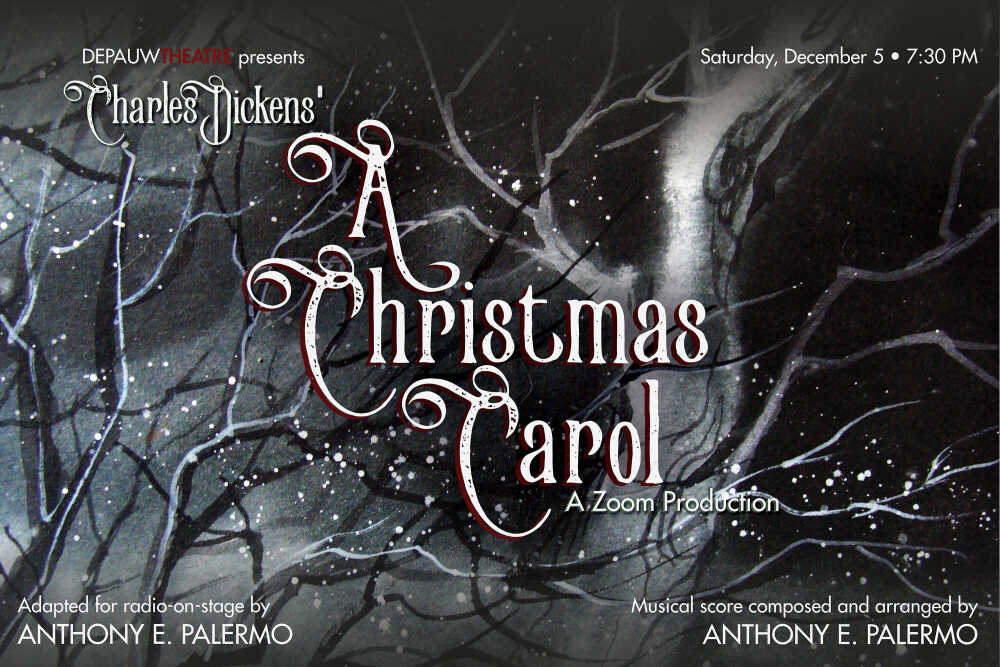 DePauw Theatre will present the beloved tale of giving, ghosts and greed this holiday season with its upcoming production of Charles Dickens’ “A Christmas Carol: A Zoom Production,” adapted for radio-on-stage by Anthony E. Palermo.

This Christmas Eve classic follows Ebenezer Scrooge as he’s haunted by the ghosts of his past, present and future. It is a powerful story of redemption and compassion that has enchanted audiences for more than 150 years.

“A Christmas Carol” premieres this Saturday, December 5 at 7:30pm on youtube.com/DePauwMusic.

As the story of “A Christmas Carol” is centered around the importance of giving back to your community during the holiday season, DePauw Theatre has partnered with United Way of Putnam County to raise money for its Basic Needs Fund, which provides access to life-saving resources for families in crisis. During this turbulent year, it is especially important to support one another and strengthen the community.

As viewers stream the show, they are asked to consider donating to United Way of Putnam County via the link provided in the description box on YouTube or by texting GIVEHELP to 91999.

Even veteran student actors have found new experiences in preparing to present a virtual play.

“Acting through a screen was a new challenge, but being able to work with this cast and crew every day, even from a distance, was one of the best parts of this strange semester,” said Carson Mara ‘21, who portrays Ebenezer Scrooge.

Mara is no stranger to DePauw Theatre, yet this is his first virtual production.

“The many laughs we had while putting this show together will be something I remember for a long time,” Mara said. “I’m very proud of what we’ve done here, and I’m very happy that we had fun while doing it.”

“A Christmas Carol” is the second virtual production in DePauw Theatre’s 2020-21 season. As with the DePauw musical, director Susan Anthony decided to collaborate with the School of Music to add in carols throughout the performance.

“It was quite an adventure,” Anthony said. “We learned something new about video or audio capabilities at each rehearsal. As all of our rehearsals were virtual, many cast members have never met each other in person. However, they still managed to come together in an ensemble. Despite the challenges of this new form, the cast and crew of this unique production were enthusiastic and innovative. It was a pleasure to work with them.”