LAST MINUTE MUSINGS: After Wednesday, maybe this is exactly who we are 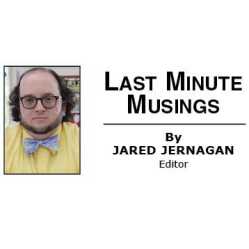 Like so many of you, I sat way too long in front of my television on Wednesday afternoon and evening, watching the events unfold with shock and horror, though not complete surprise.

It had been telegraphed for weeks that President Donald Trump’s supporters planned to rally in Washington, D.C., on the day Congress was set to affirm President-Elect Joe Biden’s victory in the November presidential election.

The day of the rally was not a coincidence and anyone who couldn’t connect the incendiary language in the aftermath of the election with the potential for incendiary actions was either blind or willfully ignoring the facts.

Yet as I watched my fellow Americans make their way into the Capitol with relative ease, I couldn’t help but feel dismayed at something I didn’t believe I would see in my lifetime.

In the aftermath, I kept hearing a similar line from legislators and others, some version of “This is NOT America” or “This isn’t who we are.”

Hall of Fame football coach Bill Parcells is noted for saying, “You are what your record says you are.”

His point, in football or any other sport, is that no matter how much talent or potential your team has, the results on the field are what matter. You may be overachieving or underachieving, but if the record says you’re a .500 team, then that’s exactly what you are.

So I have a simple message for those who questioned the Americanness of what we saw on Wednesday, so many of them more educated and experienced than me.

This is exactly who we are.

It may not be who we want to be. It’s certainly not who we could or should be. But it is who we are.

I don’t know how anyone could watch what happened Wednesday and think we were living in the exceptional, city-on-the-hill, light-of-the-world democracy so many of us were taught about growing up.

We were watching the results of years of festering division, of people increasingly occupying silos, of viewing everything in politics and life as us vs. them.

These things have to change before the bigger problems can change. But before we get there, we have to stop denying the reality of the situation.

We have a problem, America — lots of them, in fact. Until we grapple with that, we’ll keep fighting these same pointless battles.