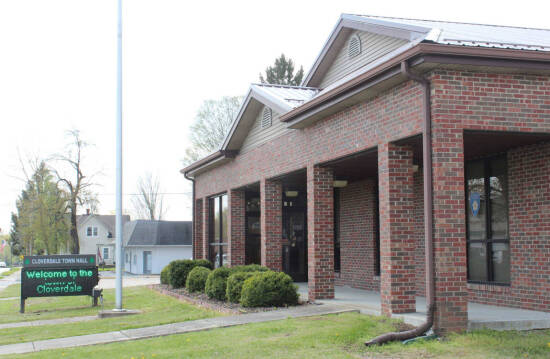 CLOVERDALE — After being in a kind of discombobulation with regard to not being filled, Cloverdale’s redevelopment and planning commissions recently got new appointments.

During the Cloverdale Town Council’s regular meeting Tuesday evening, Town Manager Jason Hartman gave a rundown of vacancies on three town boards. He also provided input on term lengths and who could appoint who.

The Cloverdale Redevelopment Commission had five vacancies, with each appointment being a one-year term. The board was slated to hold a meeting on Thursday, and thus appointments had to be made. Cloverdale Community Schools also appoints a non-voting member to redevelopment.

Hartman provided that both the town’s park and stormwater boards were filled.

Wasting no time, Council President Rick Dearwester tapped David Fish, Scott Bailey and Council Vice President Gary Bennington as his three appointees. Being their picks, the council then approved the nominations of Dearwester and Councilman Larry Fidler to the commission in separate votes.

The council appointed Brice Howell of the C Bar C Expo Center to the planning commission. However, Hartman stated prior that the council appointment had be related to the town as a government entity. It was unclear if there is such a relationship between Howell and the town.

Meanwhile, the council did not make an appointment to the BZA.

To a question from Park Board President John Berry about someone serving on two town boards, Hartman said a person could as long as one of them was not lucrative.

Besides the appointments, Hartman put forward the possibility that the county could administer Cloverdale’s zoning requirements. He stressed that this would not mean a takeover of the town’s decisions on such matters.

Hartman said this would include an interlocal agreement, similar to the town recently handing over responsibility for building inspections and permits. He also noted that County Planner Lisa Zeiner had been receptive to the move.

Town Attorney Richard Shagley provided that while the county could make recommendations, the final say would still be with the town. In essence, this would mean that Cloverdale’s local zoning could be followed more closely.

Shagley said an agreement could be drawn up and approved by the council next month. However, the Putnam County Commissioners would have to review and approve it themselves.

The council gave its blessing to move forward with the agreement.

• The council approved a request by Town Marshal Steve Hibler to purchase a 17-month-old Belgian Malinois as a K-9 officer. Deputy Marshal Sam Fogle, who is also a K-9 trainer, said the dog would be trained in narcotics, detecting and apprehension.

The council agreed to a $7,000 down payment, with payments over the next six weeks to round out a $10,500 total cost for the dog. Hibler said the purchase would be donation-based and that some local businesses would step up.

• The council approved to change the meeting time for the Cloverdale Redevelopment Commission from 3 p.m. to 7 p.m. on the fourth Thursday of every month.

• The council approved repairing a sidewalk at the Cloverdale Town Hall for $2,192. Hartman said it had become a hazard and would be repaired by slabjacking. The work will be done by Indiana Foundation Service.

• The council passed Ordinance 2021-2 to re-establish the town’s Cumulative Capital Development Fund. This involves raising the tax rate half a cent to five cents for every $100 of assessed value.

• The council approved for the clerk-treasurer to be the sole signatory on checks. Clerk-Treasurer Kelly Maners stated it was her role, per state law, to handle finances and write checks on the council’s authority. She added that having two signatories violates checks and balances.

• The council accepted a bid by Cummings Farms for $700 to use the town’s seven acres of farmland.

As well as Hartman, Hibler, Maners and Shagley, the entire council was present for the meeting.