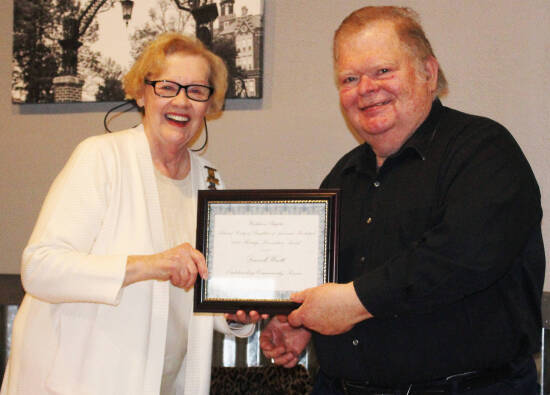 A Putnam County man who has done his best to keep alive the only town in which he has ever called home has been honored by Washburn Chapter, Daughters of the American Revolution (DAR)

But the B & O Railroad deserted the town, the quarry closed and downtown basically became a ghost town.

“‘Til Darrell came along, Russellville was on life support,” Bingham added.

Wiatt took the leadership role in preserving the old Russellville School, once a high school until North Putnam consolidation swallowed it up in 1970.

“Darrell appealed to the Community Foundation for a grant to rejuvenate the still-standing vacant school building,” Bingham detailed. “We all know what happens to little towns when their schools close.”

Built in 1958 and expanded a fews years later, the old school building had gaping holes in the roof and scarred walls where blackboards had been pried off, leaving a legacy of sticky glue.

“Somebody had the bright idea to take everything out of the building,” Bingham admonished.

“It was a shell,” Wiatt interjected.

But Wiatt’s request was honored by the Foundation and townspeople pitched in with labor and support. And once the building was stabilized came a number of regular events, the Halloween Social, Christmas cantata, rollerskating nights and legendary community dinners.

“Now there is a full schedule of activities in the Community Center,” Bingham said. “It’s the glue that holds the town together.

“And Darrell Wiatt is the glue master who helps keep the doors open.”

Bingham noted that Wiatt has two Revolutionary War veteran ancestors buried within 10 miles of his residence. One, Isiah Clavin, was at Yorktown when British Gen. Corwallis gave up his sword.

“He should be in the DAR,” Bingham said, “but he couldn’t pass the physical.”

Wiatt’s career includes 40 years as an educator, teaching grades 2-6 at Russellville and serving as its principal for 12 years. He also formerly taught fourth grade at Bainbridge and did two terms on the North Putnam School Board.

Previous winners of the DAR Historic Preservation Award have been John Baughman for his essays on local history; Larry Tippin for cemetery restoration; James Cooper, iron bridge expert; Malcolm Romine for tales of old-time community life; John and Carolyn Carson for organizing the Greencastle Alumni Association and preserving GHS memorabilia; Tim and Kim Shinn for restoration of the Zaring house at Vine and Poplar streets; City of Greencastle and DePauw University for cooperation in securing the first Stellar Community Grant from the state; Lee and Susan Stewart for bringing Putnamville on the Old National Road back to life; Phil Gick for work in getting Forest Hill Cemetery listed on the National Register of Historic Places so that grant money could be secured to repair and refurbish the Union soldier Civil War Monument; Jon Rice for his efforts with Find-a-Grave, not only in Putnam County but places beyond; and the Barr sisters, Anita McEnulty and Mary Ruth Jones, for compiling the writings of their father, longtime local journalist David Barr, into a two-volume set.