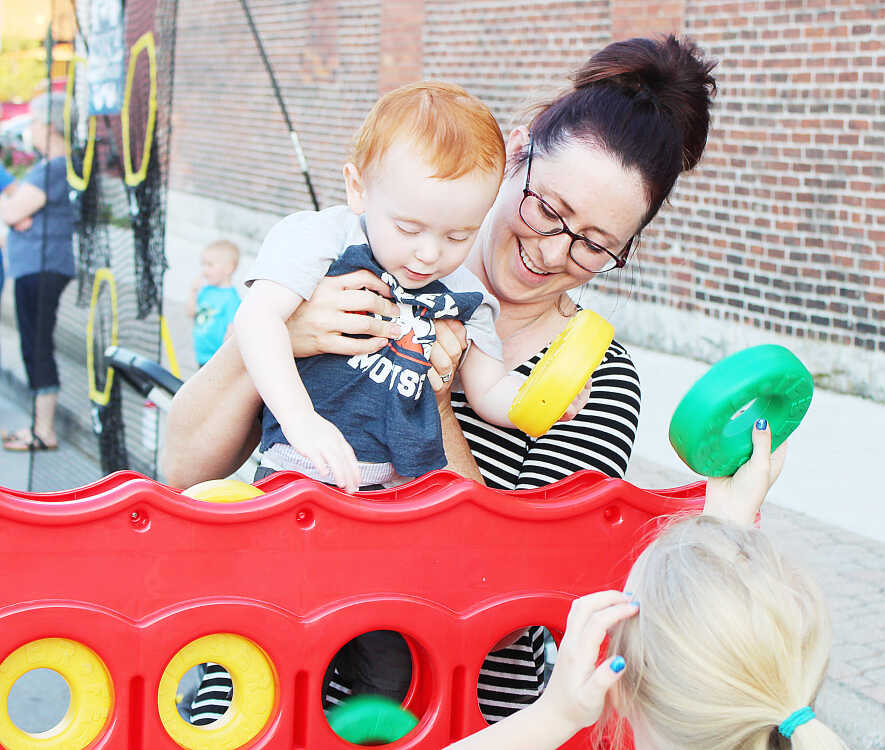 Weston Reberger and mom Breanna enjoy a game of Connect Four inside the First Friday Kid Zone, which will be expanded this week.
Banner Graphic/JARED JERNAGAN

With Prime Real Estate as the sponsor, July First Friday is set for 5-10 p.m. Friday, July 2 in downtown Greencastle.

Prime will be providing a number of activities, including a 30-foot inflatable rock wall and slide and train rides for children as well as handing out balloons and other prizes near their building. Prime will also host a Coats for Kids drive.

As usual, the event will include three stages of live music beginning at 7 p.m. The Lemon Brothers will play the north Courthouse Stage, while Hunter Wainscott and the Vagabonds will play South Indiana Street. Hunter & Girton will play the Wasser Brewing Co. stage on East Franklin Street.

There will also be 12 craft and art vendors throughout the space that encompasses Indiana and Franklin streets.

Two new food trucks will be joining the vendors who are already part of the event: Wally’s Food Truck and Chandler Farm Food Truck.

The Kid Zone will be expanding this month, adding more games to include extra-large cornhole, extra-large Jenga and extra-large checkers, as well as the Kona Ice truck.