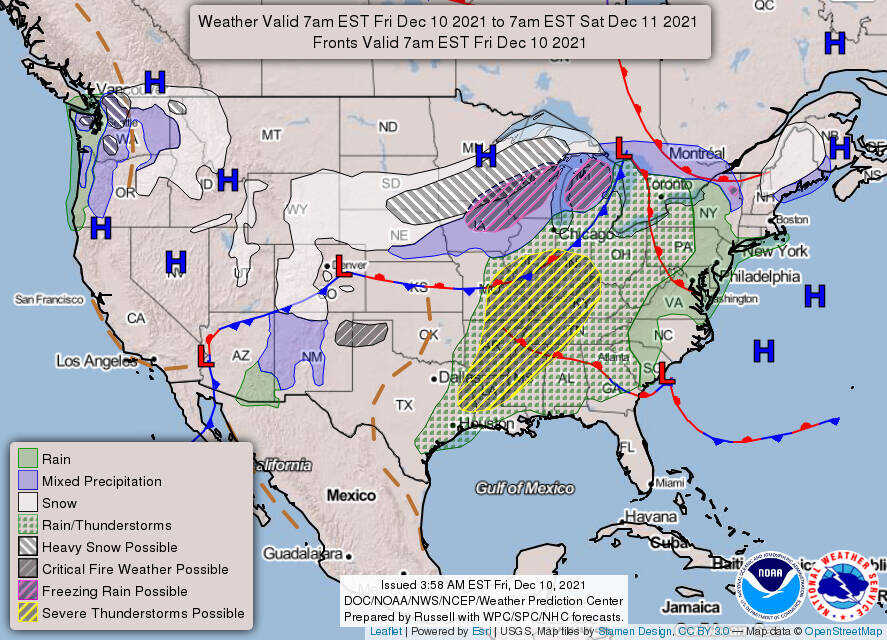 A storm that could bring snow to the Rockies and the upper Midwest has the possibility of bringing something less expected for mid-December to Indiana — tornadoes.

Putnam County is part of a large portion of Indiana and a large area encompassing several states stretching to east Texas that will be at an increased risk of severe storms and even potential tornadoes Friday night into Saturday morning.

Severe Weather Specialist Chris Edwards of the Putnam County Emergency Management Agency warned Friday that the severe risk has been upgraded to “enhanced,” which is high for this time of year.

He noted that the strongest shear for rotational updrafts is likely to be a bit south of Putnam County, but the National Weather Service Storm Prediction Center is still worried that tornadoes, some as strong as EF2+ are possible overnight for Central Indiana.

While the air is expected to be unseasonably warm on Friday, such severe storms are usually associated with higher temperatures of spring or summer. However, Edwards said the temperature in the upper atmosphere is much colder this time of year, so there will still be plenty of lift for these storms with surface temperatures approaching 60 degrees.

That means that warm air drifting up from the Gulf of Mexico meeting with a cold front coming from the west could have strong consequences.

Edwards noted that if the area gets anything severe, it will be overnight.

“A squall line may have tornadoes and straightline winds and discrete cells may become supercells as well,” Edwards said. “I won’t be surprised if a Moderate risk is issued to our south later in the day.”