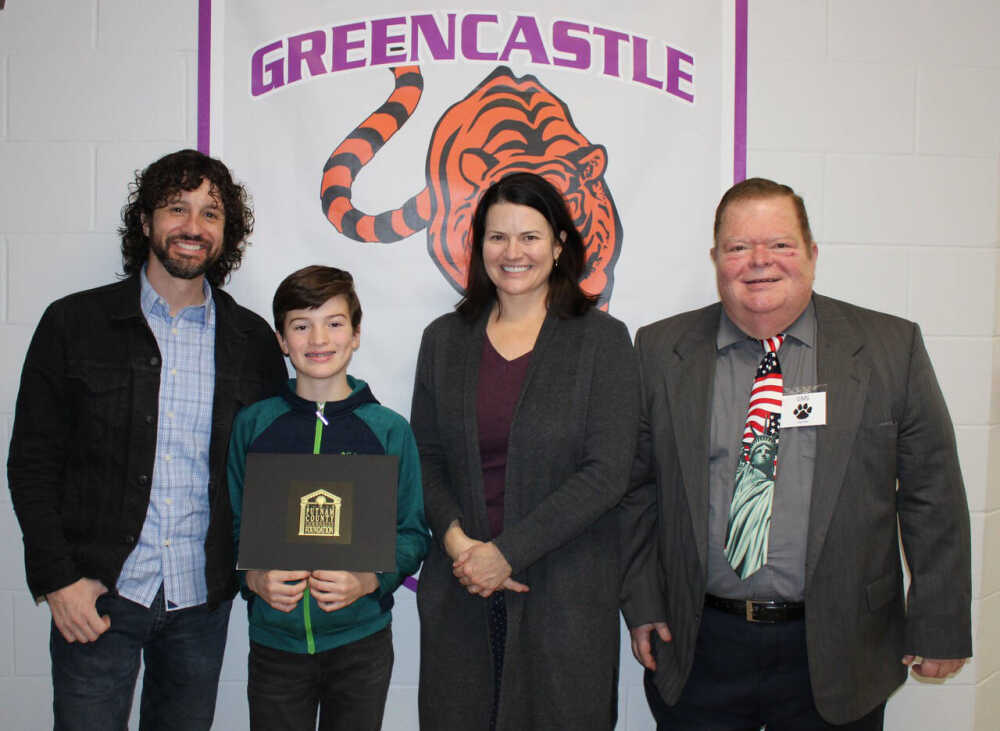 Greencastle Middle School student Cyrus Gurnon smiles after being announced as the winner of the 2021 Darrell Wiatt Family Philanthropy Essay Contest. With him are (from left) Dan Gurnon, Stephanie Gurnon and Darrell Wiatt.
Courtesy photo

Gurnon is a student in Melissa Knipp’s class at Greencastle Middle School.

In recognition of Gurnon’s accomplishment, Social Promise, the charity of his choice, received a $150 grant. Additionally, Greencastle Middle School received a $500 grant.

Gurnon’s essay highlighted the philanthropic work of Sharon Crary, the founder of Social Promise. The organization is devoted to improving health and providing educational opportunities for children in rural Uganda.

Entries were accepted from seventh-grade students throughout the county. They were instructed to write a 500-word essay with the theme “The Philanthropist I Know Personally and Admire the Most.”

The essays were reviewed by four judges at the county level and scored on criteria including spelling, grammar, organization, content and understanding of philanthropy. Five finalists were chosen from the participating middle schools in Putnam County.

Logan Allen, a student at Greencastle Middle School, wrote about his grandfather, David Archer. He chose the Betty and Marjorie Diedorf Scholarship to receive a Finalist Grant Award.

Atticus South, a student at North Putnam Middle School, chose the Putnam County Development Commission to also receive a Finalist Grant Award. His grandmother, Barbara South, was the philanthropist about whom he wrote.

Brayden Chew, also a student at North Putnam Middle School, chose the North Putnam Dollars for Scholars to receive a Finalist Grant Award. The philanthropist he wrote about admiring most was Alan Zerkel.

The Darrell Wiatt Family Philanthropy Essay Contest was established in 2006 by Darrell Wiatt, a former educator at North Putnam Schools. Through the program, the Foundation aims to recognize a few of the everyday philanthropists in Putnam County.

The grants are made from the Darrell Wiatt Family Philanthropy Essay Contest Endowment, which was established in 2012 by Wiatt’s family to promote philanthropic education and award them for the essay contest.