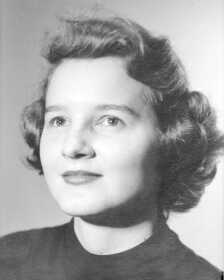 She was born on June 27, 1931 to Edgar Joseph Kelly and Leola Pilcher Kelly in New Orleans, La. Ann was the third child and second daughter in the family of four children.

She went to Henry W. Allen Elementary School, and took herself to church alone at the age of six by riding the trolley. She moved to Washington, D. C., where her mother was transferred with the Navy Department in 1941. In Washington, she attended Alice Deal Jr. High School for ninth grade and Woodrow Wilson Sr. High School, graduating 12th in her class of 350 and winning a full tuition scholarship to Smith College in Northampton, Mass.

While at Smith, Ann met Bob, a Yale graduate attending Yale Divinity School, when the music stopped and they were dancing together at a Christian Student Retreat. That was the first time he showed her the stars. They married in 1951 after her sophomore year and both transferred to New York City, where Ann finished at Barnard College and Bob attended Union Theological Seminary. Ann studied with Ursula Niebuhr, wife of Reinhold Niebuhr, and Paul Tillich in getting her undergraduate degree in religion. While Bob worked on his Ph.D. at Columbia, Ann received her MA degree in religion from Union Theological Seminary and Columbia.

Ann worked as the Assistant to the Protestant Chaplain at Columbia for two years. During this time, Beth was born (1955) and Bob was recruited to come to Greencastle to teach at DePauw University in Greencastle (1956).  Son Christopher joined the family in 1962. There are three grandchildren: Robert, Harriet and Emma.

During child rearing years Ann taught Headstart, Nursery School at Gobin United Methodist Church and, for eight different years, at DePauw University, teaching overflow classes in Old and New Testament. Also during this time, Ann and Bob collaborated on writing curriculum for the United Methodist Church for teachers and students in the nursery class and a parent handbook for fifth and sixth grade students. These were used across the United States in Methodist Church Sunday School classes and parent groups.

With both children in school full time, Ann sought more academic degrees.  She obtained a second master’s degree from Butler University in Personality Theory and Religion and eventually received her MSW from IU School of Social Work in Mental Health of Children and Families. This led to her work with Methodist Hospital’s Buchanan Counseling Center for eight years, Cummins Mental Health Center for six years and Old National Trail for 10 years, where she served as social worker to children with special needs.

As she became more involved with the schools and presenting Good Touch/Bad Touch programs, she became aware of how widespread child sexual abuse was in the county. She started a sex offender program for the county and convinced Judge Vaughn to send more than 350 men in 15 years for treatment from 1991-2005. She worked first with Martin Mishchler and then Dr. Hugh Hanlin as co-therapists.

After retirement from the schools in 1998, she was appointed by Judge Headley in 2003 to the Putnam County Child Protection Team, where she served until her death.

Ann was also very active in the Greencastle community, serving as Sunday school teacher at Gobin UMC;  as the President, co-President, secretary at various times for the League of Women Voters; Indiana State Treasurer of the American Association of Marriage and Family Therapists; as secretary of the NAACP Greencastle Branch; as Business and Professional Women’s legislative chair; as A-Way Home Shelter president of the advisory board; as Putnam County Red Cross Disaster Chair and for the national Red Cross being sent to seven different disasters in the states and Puerto Rico; on Commission on Religion and Race for the Indiana UMC; on the West District Committee on Missions for the UMC; on the Mission Resource Team for the  INUMC, being sent six different times to Liberia and Sierra Leone after their civil war to teach churches how to help traumatized children; and on the INUMC Board of Missions Global Health Team for the UMC in charge of malaria education and prevention fund raising.

She was preceded in death by her parents, sister Edlea Kelly Jones, brother Kerwin Kelly and by her beloved husband, Rev. Dr. Robert D. Newton in February of 2020.

Funeral arrangements are being handled by Bittles and Hurt for cremation. A memorial service will be held at Gobin Memorial United Methodist Church on Saturday, Jan. 29 at 2 p.m. with calling at 1 p.m. before the service.