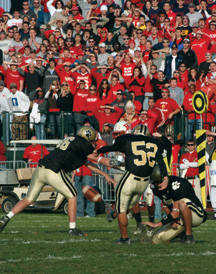 Tip your hat to that man.

A surprising thing happened to me at Saturday's 114th Monon Bell Classic. I stayed perfectly calm.

2007 marks my ninth Bell game, but my first as a sports reporter. Before, I was there as a Wabash student/alum, so I obviously always wanted Wabash to win.

But, as I've said previously, Saturday was different. I've spent the season here in Greencastle covering DePauw, so I knew I could be happy for the Tigers (but not myself) if they won.

I thought, with my divided interests, this would be my most stressful Bell game yet. It wasn't even close.

I spent the entire afternoon calmly watching as the Little Giants and Tigers fought back and forth. It was a great game -- the second-best I've seen. Both teams left everything on the field, and although it may be a clichť, it was a shame to see someone have to lose it.

And kudos to DePauw sophomore kicker Jordan Havercamp. Not only did he nail a 47-yard field goal as time expired, he did it after missing an extra point that would have tied the game earlier. That's what having a short memory as an athlete is all about.

Honestly, the most overwhelming thing about the whole day was just being there. This game occupies such a high place of esteem in my own sports world, I just kept thinking, "I can't believe I'm on the field to cover the Bell game."

I didn't leave the game with my stomach hurting and a headache, as has happened in the past. As Havercamp's field goal split the uprights and the DePauw students rushed the field, I thought, "Well, good for them." I never would have said that before. I'm still not sure if I like it.

I think I need to take a shower.

Personally, the one thing I would have liked to see was overtime. In 114 games, this rivalry has never gone to OT. It came close in 2001, but Wabash's Jake Knott, Ryan Short and Kurt Casper pulled out a miracle with "The Catch." As a Wabash student, I loved that day.

On Saturday, Jordan Havercamp pulled out a miracle with what I suppose will be called "The Kick." As a BannerGraphic reporter, I was also pleased with that day.

Oh, and one more thing. I felt personally insulted as I stood on the sideline with a bunch of other people with "media" marked on the badges on their chests. Now, there were a lot of us there who actually were media. There were reporters, photographers, video camera operators and television and radio correspondents. The Bell game brings in a lot of extra media personel I don't normally have to contend with, but that's cool. The game deserves the extra coverage. We all belong there.

But there were also lots of fans. Does anyone else think that a 10-year-old kid or several drunk college kids qualify as media? What about people, with no direct ties to the team, openly cheering for one side or the other? Do you think those are media? Me neither.

The sideline is a place where coaches, players and trainers do their jobs. It is also a place where those of us in the media are privileged to do our jobs. Anyone else needs to stay out of the way of the professionals.