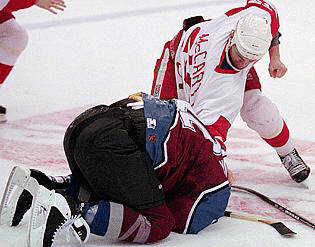 I'm tired of the NBA.

This isn't news, as I have been weary of the league for several years now. However, this year it had given me just a bit of hope. I found the Western Conference intriguing, as the top nine or 10 teams seemed to be better than anything in the east, save Boston and Detroit.

But, here we are, like a week into the playoffs and I'm sick of it again. Dallas and Phoenix, the two most interesting teams, are both out. The Lakers and Spurs, the two most hateable teams in my book, seem poised to battle for the conference title.

And this all makes me wonder, what happened to the NHL? It used to be that as the NBA playoffs droned away on NBC and TNT, I could flip to ESPN to see some good action. I love fights between toothless guys.

But now most of the NHL's games are carried by Vs., a network that our crap cable here in Greencastle doesn't carry.

This means my beloved Red Wings are up 3-0 on the much-hated Avalanche, and I've only had the chance to watch one game last Saturday on NBC.

In the '90s, some of my favorite sports memories were of watching these two teams, which hated each other so violently, duking it out.

And now my poor NHL has been reduced to a B-list cable network, while the big boys at ESPN carry the worst professional league in American sports. (I might even watch the MLS over the NBA if given the choice.)

I wish someone at the accessible networks would get with the program and pick the NHL up again.

I guess I could move to Canada. I could get affordable healthcare and see hockey on TV.