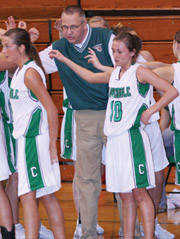 It's odd for me to post blogs on consecutive days. In the first place, I liked my blog from early Tuesday morning, and I don't want to cut its run short. If you like Ken Griffey Jr. or deeply dislike his heavily roided colleagues like Bonds and McGuire, check it out here.

Secondly, I'm kind of lazy. I'm supposed to blog once a week, so why set the expectations higher?

But on Tuesday, I found out some news that absolutely shocked me, and I don't want to be quiet. I was totally blind sided by the Cloverdale School Board's decision to fire varsity girls' basketball coach Bruce Cook.

I guess I find this so bizarre because Cook has taken a program that had not been very good for a long time and made it the class of Putnam County and one of the best in the WCC.

In the last two seasons, the Clovers have won two Putnam County titles and tied for one WCC title.

Between 1976 (the beginning of IHSAA girls' basketball) and 2006, CHS won a combined zero county and conference titles.

But beyond all that, Cook is an engaging and charismatic guy. He cares for the girls he coaches and they all seem to respond well to him. They are nice young ladies who are all a credit to their school, their community and their families.

I think the coach had something to do with that as well.

The bottom line is, I'm deeply disappointed in the school board's decision. I sincerely hope they had a good reason for what they did. The fact that I don't understand that reason is of no consequence, as I'm neither a school board member nor a Cloverdale resident.

But I liked dealing with the coach, just the same, and I hate to see him go.

Coaches keep their jobs on year-to-year contracts, so this kind of thing happens. We all understand that. But it doesn't make it any easier when a class act doesn't get his contract renewed.

When the new coaching staff comes along, I wish them nothing but the best. And most of all, I wish very good things on the kids. If I didn't think a lot of our young athletes, I'd be in the wrong line of work.

So I'll take this opportunity to say goodbye to Cook and all the other coaches who won't be back next year.

To Bruce Cook, Tim Savini, Dave Keller, Brian Gardner, Wes Peek, Dave Pasch, Michelle Spencer and Scott Spencer: thank you for your cooperation in the past year. Good luck in the future. And to any others I may have missed, I wish you the best as well.

That's about all I got, kids. See you next week.

More from this blogger · Jared Jernagan
Comments
View 29 comments
Note: The nature of the Internet makes it impractical for our staff to review every comment. Please note that those who post comments on this website may do so using a screen name, which may or may not reflect a website user's actual name. Readers should be careful not to assign comments to real people who may have names similar to screen names. Refrain from obscenity in your comments, and to keep discussions civil, don't say anything in a way your grandmother would be ashamed to read.
Respond to this blog