What a bunch of wimps 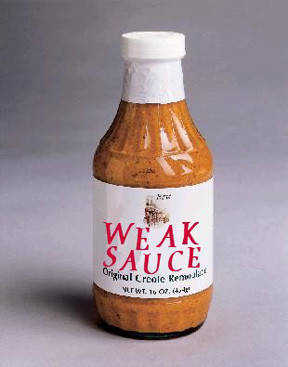 They've been pouring this on pretty thick in New Haven.

My Olympic hangover has ended, so I will end my hiatus now.

I'm sure many of you have heard about this, but it's worth telling again. Apparently there is a hard-throwing nine-year-old who formerly played in the Youth Baseball League of New Haven (Conn.) named Jericho Scott.

However, young Mr. Scott is apparently so good and throws so fast that he has been told by the league that he can't pitch any more. According to an AP report, the league's attorney said that facing a pitcher who can throw as fast as young Jericho is frightening to beginning players.

You know what? I was a beginning baseball player once, and I was extremely frightened of the ball. But you know something else? I got over it.

It's not like this kid is some 16-year-old who is out there throwing at and beaning seven-year-olds. The kid is one of their own peers.

This isn't a Danny Almonte situation we're talking about.

Furthremore, the kid's never even hit anybody! Not only does he have impressive speed, but also excellent control.

What kind of world are we living in when we punish a kid for excelling? The saddest part of this all is the kid thinks it's his fault. In the wire story I read, he said, "I feel sad. I feel like it's my fault nobody could play."

NOW THAT MAKES ME SAD. This poor kid just wants to play baseball, and when his coach puts him on the mound, the other team refuses to take the field. That's not his fault, and for him to think so because of a bunch of adults is truly reprehensible.

There's a term my friends and I like to use for this kind of behavior: Weak Sauce!

There's another term that I'd like to use for these league officials and what they're turning these kids into, but it wouldn't be PC for me to use it in this forum.

But here's the bottom line for me. We Americans wonder why it is that we can't win when we play baseball in the Olympics or the World Baseball Classic. It's our national pastime isn't it? We invented the game, right? What gives?

I'll tell you what gives. We've anesthetized the sport to the point that we can't compete with the countries that actually make it a competition. I agree that every kid should have the right to play the game and enjoy it. But those kids also have to understand that winning and losing are parts of sports, just like they're parts of life. That's the way it is.

As long as we go on teaching them that life or any part of it is fair, we're doing them a disservice.

The truth is that some of us have the talent to go a long way on the diamond, and some of us can't hack it.

I learned that the hard way early on, and I still love the sport.

More from this blogger · Jared Jernagan
Comments
View 9 comments
Note: The nature of the Internet makes it impractical for our staff to review every comment. Please note that those who post comments on this website may do so using a screen name, which may or may not reflect a website user's actual name. Readers should be careful not to assign comments to real people who may have names similar to screen names. Refrain from obscenity in your comments, and to keep discussions civil, don't say anything in a way your grandmother would be ashamed to read.
Respond to this blog