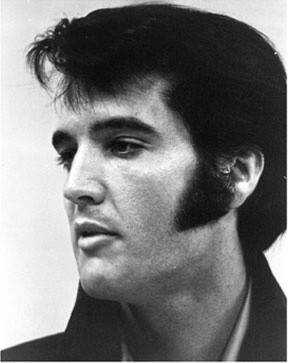 Best sideburns since the Civil War.

74 years ago today, perhaps the most famous person of the 20th century was born in Tupelo, Miss.

That's right, today is Elvis Aaron Presley's birthday. I'd be remiss if I didn't mention it.

It's strange the way even musicians and fans of my age, who were born after his death and well after his heyday, still seem to need to pay homage to the King.

But I'd say this is as much about Elvis the cultural icon, as it is about Elvis the musician. I have a daily calendar featuring a rock 'n' roll quote every day. Here's today's:

I don't know where or when Elvis said that, but I think it says a lot about what the music industry is. It's about entertainment. Elvis was a star because, yes, he had a good voice, but just as much because of his look, the feel of the music and the sheer animal magnetism of those early performances.

He gave people something they had never seen before. It scared a lot of people, but it intrigued even more.

But as odd as it might seem, Elvis did it long before any of them. And he certainly did it better.

So Elvis was right. He didn't have to know much about music. But he knew everything about putting on a great show. And that's why we still talk about him today.

(As a side note, in the hundreds of CDs I own, only one of them is an Elvis album, and it's of Christmas music. Elvis is THE definitive artist of the holiday genre. But my favorite Elvis song is a gospel number, "Peace in the Valley." "Suspicious Minds" is my favorite non-Christmas, non-religious Elvis song.)