'What's so bad about feeling good?' 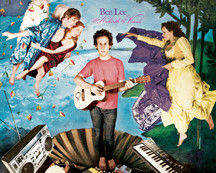 The question central to Ben Lee's new album The Rebirth of Venus, is posed directly on the opening track "What's So Bad (About Feeling Good)?"

It's a simple thought on which the entire album reflects. Even while grappling with issues of gender roles and the world political climate, Rebirth, released April 28 on New West Records, never stops being a fun listen.

While critics have made much of the album's grappling with femininity, what's lost in this focus is the music itself -- upbeat, cheeky, an all-around good time. Lee recognizes the balance between the two.

"I've always aspired to have fun no matter what themes I'm talking about," Lee said. "And I'm proud of the fact that I've made a record that works both as purely a piece of pop music, that also adds a statement on kind of where we're at collectively and individually."

A big statement comes in "I Love Pop Music," as Lee sings (or speaks) about worldwide political, economic and environmental problems over a catchy, happy melody.

As the song says, "It's politics you can romance to."

Tribute is paid throughout to femininity, as the title indicates. "Yoko Ono" takes the other side of the argument on the figure many claim broke up the Beatles. "Boy With a Barbie" takes to task traditional gender roles. "Blue Denim" is a warning to girls about what he's really after.

"I'm a Woman Too" is Lee's big statement song, encouraging all listeners to embrace more "feminine" qualities such as nurturing, intuition, tenderness and warmth.

The emotional climax comes near the end of "Families Cheating at Board Games," the 12th of 13 tracks. Singing about a sort of suburban desperation, Lee screams over a backing choir for people to "Break away from what you know./ You are not alone."

The album works on whatever level one chooses. You can ponder the meaning and significance of Lee's lyrics or you can simply tap your feet. If you do both, you certainly get it.

Other purely fun numbers include "Surrender" and "Sing." More tender moments come in "Rise Up" and the self-deprecating "Bad Poetry." The latter song is about what it's like to be on that sappy, teenage high of being in love. The song works because it gets its own joke. It isn't just called "Bad Poetry," it borders on being bad poetry, but it's heartfelt and genuine.

Lee strikes a delicate balance with The Rebirth of Venus, writing thought-provoking music while not forgetting it's still pop music. It should be a good time. Musicians can get too caught up in their desire to "change the world" and forget that their main purpose is to entertain. This is a fun record and evidence that Lee still understands the task at hand.

He takes himself seriously -- just not too seriously. Listeners should thank him for that.