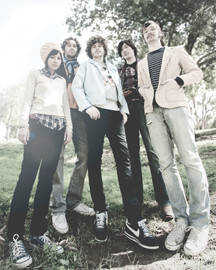 Dusty Rhodes and the River Band

While driving one of my favorite stretches of highway recently, I made a delightful discovery -- summer driving weather is back.

That means it's time to grab your favorite summer CD, roll down the windows and crank up the volume.

Summer driving music can come in many forms. The Doobie Brothers made some great stuff for it. (Really, what's better than rockin' down the highway to "Rockin' Down the Highway"?)

On the other hand, my teenage summers were spent in an old Mustang with Nirvana's Nevermind in the player.

Regardless of their genre of choice, all real music lovers have at least one album that defines summer for them. (In my case, it's probably a dozen.)

A new addition to my summer collection may just have been released on Tuesday by SideOneDummy Records. Dusty Rhodes and the River Band's Palace and Stage has been occupying my country drives with its energy and rich, varied textures.

This southern California roots rock outfit offers up a mix of modern rock, gospel, Motown and folk that is immediately catchy and fun.

The album kicks off with a flourish of guitars and organ that gives way to the driving beat of "All One," a singalong that dares you not to become immediately addicted.

The first track displays the strength of the entire album -- it's not typical rock. Sure, there are two guitars (Kyle Divine and Edson Choi), a bass (Brad Babinski) and drums (Eric Chirco), but what sets this apart are the other two pieces of this six-piece. Dustin Apodaca mans the keyboards, most notably the organ, and Andrea Babinski adds violin and string arrangements.

It's the keyboards and strings that take what might otherwise be average songs and put them over the top.

The band also keeps it fresh with different vocalists. Apodaca is out front for half the album's tracks, but Choi, Divine and Babinski all take their turns behind the mic. The record is richer for it.

The album could be accused of being front-loaded, with arguably its best five songs coming at the outset. Here we find three anthems in "All One," "Blind Lead the Blind" and the title track, followed by the ballads "Andy" and "Sorry for Now."

But listen to the latter half of the album, and one doesn't find the quality suffering much. A late gem comes when Babinski adds her female vocal to "So Low." The song also features the best use of xylophone in a rock song this side of the Violent Femmes.

Palace and Stage probably isn't for everyone, but maybe it should be. It's worth a spin for anyone not looking for cookie-cutter rock songs. Dusty Rhodes and the River Band isn't afraid to take a chance and have fun. They definitely reward the adventurous listener for their trouble and the money spent.