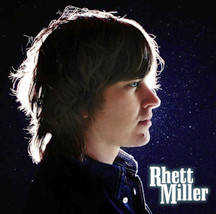 "My approach to songwriting has always been to take a heavy subject and put it to a bouncy tune," Miller said. "This record takes that trick to the next level.

"It's still a fun record to listen to. It's a fine line you gotta walk, you know?" he added.

The eponymous Rhett Miller, released Tuesday on Shout! Factory Records, opens up Miller's mind and heart once again. It's a world populated with lovable losers who, even when things are going well, seem to wait for them to go wrong.

Similar to artists like John Prine or Todd Snider, Miller has an ability to either make his listeners laugh or cry. At his best, we're doing both.

It's a trait such artists share with good comedians. This is underscored in "I Need To Know Where I Stand," when he speaks of "Killing at a comedy club in Hollywood/After years of psychotheraphy." The irony is not lost on the narrator when he goes on to say, "The people all laugh but I'm dead on the inside."

"Where I Stand," along with "Like Love," "Caroline" and "If It's Not Love" fit the mold of "heavy subject/bouncy tune." Each one is a song about love, set to a fun pop or rock tune. Each one also seems to be waithing for everything to fall apart.

A number of tracks share a similar outlook, but set it to a more fitting slow song. "Nobody Says I Love You Anymore" kicks the record off with the desperation of much of the record obvious in Miller's voice. "Bonfire" and "Haphazardly" slow down the middle of the album.

"Lashes," the 11th track, is the first love song that really seems to offer much hope, as Miller says "I could live on your love and nothing else if I had to." Oddly, it turns much of the rest of the album upside down, as it's a happy (or at least content) song that sounds sad musically.

The two most fun songs of the album, though, fit none of the above formulae. "Happy Birthday Don't Die" tells the story of an old woman living in 2106. After painting a futuristic landscape straight out of a Philip K. Dick novel, Miller tells the story of the heroine dying on her 100th birthday. It's not as sad as it sounds, though; it's just surreal.

The lightest moment of the 12 tracks comes in "Another Girlfriend," as Miller returns to the womanizing theme present on several Old 97's releases. One can't help but laugh as he says, "The last thing I need is another girlfriend./Two's enough for me./Two's enough, and you would make three."

Miller has crafted another round of quality songs. Fans of his work with Old 97's will find certain elements missing, but this isn't an Old 97's record. What Rhett Miller offers is a personal look into the deeper reaches of a fine songwriter's heart and mind. It's not always a fun place to be, but it's a place from which springs some quality music.

This album should be checked out, especially for those already familiar with Miller's previous work.