O'Riordan's voice as strong as ever 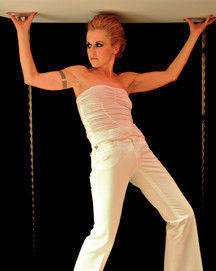 Although her voice was the driving force behind a band that sold more than 40 million albums, Dolores O'Riordan has fallen into relative anonymity in the current decade. Tuesday's release of the ex-Cranberries lead singer's No Baggage on Zo'/Rounder Records should leave listeners with one question: Why have we forgotten Dolores O'Riordan?

At the height of The Cranberries' power in the mid-1990s, it was O'Riordan's voice and songwriting that powered big hits like "Linger," "Zombie" and "Dreams." It was a distinctive voice. It was a powerful voice. It was, perhaps, one of the best female voices in rock.

On No Baggage, O'Riordan's voice still is all of these things.

The singer's range is on display on the new record, as any song from the piano ballad "Lunatic" to the modern rocker "Skeleton" to the pop rock of "This Journey" is carried by O'Riordan's familiar voice.

The latter is the lead single, and it's obvious why. The beat is infectious and the simple chorus of "This is your life./ This is your moment," begs you to sing along.

Other standout moments include opening track "Switch Off the Moment," the heavy Indian influence of "Throw Your Arms Around Me" and the straight-up catchiness of "It's You."

It's easy to say O'Riordan is back with this one, but did she ever really go away? Suffice it to say, Dolores O'Riordan is still around and you should still be tuning in.

A long break in releases from The Cranberries' Wake Up and Smell the Coffee in 2001 to O'Riordan's solo debut Are You Listening in 2007 may have limited O'Riordan's album sales, but it never put a damper on her ability. She still has the pipes to carry a high-quality record, and that's exactly what she's done.

For fans of the Cranberries, O'Riordan's voice or Irish vocalists in general, this one is to be checked out.