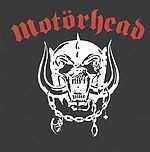 Mean enough for you?

I was scanning through my iPod the other day and in the M section, I noticed Motˆrhead and Mˆtley Cr¸e right next to each other. It got me thinking about German class in college and a top-five music list. I rarely think of one of these subjects and spend way too much time in my life thinking about the other.

On the subject of German class, I basically only retained two things from two semesters. The first is that "ie" is pronounced e and "ei" is pronounced i. The second is the umlaut. (Those two little dots you sometimes see over German vowels.) I don't remember much about what the umlaut does, just what it's called and that it looks pretty cool.

To be perfectly honest, most of the bands you use the umlaut are pretty terrible. (Can you actually listen to bands with names like K*ll Cheerlead'r or Toilet Bˆys? Me neither.)

However, here are a handful of umlaut bands actually worthwhile.

5) Mˆtley Cr¸e: Seem to use the umlauts to be taken seriously. This is ironic since they wore platform shoes, makeup and Aquanet. All the same, they could rock when they really wanted.

4) Blue ÷yster Cult: I should probably know a lot more about Blue ÷yster Cult than I do. Here's the complete list: "Don't Fear the Reaper," "Burnin' For You" and "Godzilla".

In fact, my favorite thing about Blue ÷yster Cult is the "More Cowbell" skit from SNL. I was so crestfallen to find out that their producer was actually Sandy Pearlman and not Bruce Dickinson. But then again, the umlaut was Pearlman's idea, so he's the reason they're on this list at all.

Top song: Most would tell you "Don't Fear the Reaper," but they'd be wrong. It's "Godzilla."

3) H¸sker D¸: I'd like to tell you these Minneapolis punk rockers are the smartest group of the bunch, but their use of the umlauts seems to be a misspelling. They are actually named after the Danish board game "Husker Du?"

All the same, though, these guys are in the running (along with Dinosaur Jr. and Jesus and Mary Chain) for loudest band ever. They certainly have the credibility to use mean punctuation.

Top song: "She Floated Away"

2) Motˆrhead: Probably the reason so many metal bands since have used the umlaut. Vocalist Lemmy Kilmister has said, "I only put it there too look mean." And look mean it has -- almost as mean as the moles on Lemmy's cheek.

But this brings up a great philosophical debate for me: "Does the umlaut really make Motˆrhead look mean? Or does Motˆrhead make the umlaut look mean?"

1) Spın̈al Tap: Proving once again, that if you're going to do something stupid, it's worth taking to its logical extreme, Spın̈al Tap put the umlaut over the "n." However, if you look at your computer screen, you can tell this is against the rules because the mark is kind of creeping toward the "a."

But, hey, when you aren't technically a real band, I guess rules don't apply to you -- especially not the rules of foreign grammar. Some might object to me putting a semi-fictional band at the top of this list, but I can legitimately say that "one of England's loudest bands -- and most punctual" has provided me more hours of entertainment than any of the others.

And that's what a band should do.