Larkin in the Hall 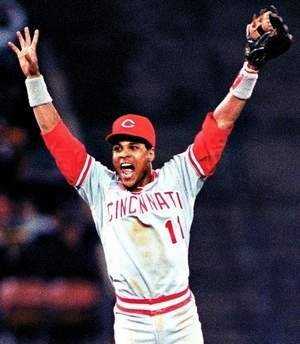 Monday was the first Baseball Hall of Fame announcement in a long time of which I can say I had absolutely no clue what was going to happen.

Usually, based on what analysts say, my recollections of the player and all the pertinent stats, I feel I have a pretty good grip on who's in and who's out.

But this year was different.

When the hero of your youth is the man up to the block, you have to admit that you really have no clue what's going to happen. It's not a matter of the logic you apply all those other years.

I can only say that I'm overjoyed Barry Larkin got the call on Monday. Some of the reasons for that have to do with the man himself -- a Cincinnati boy who spent all 19 of his MLB season with his hometown Reds.

Larkin was the face of the organization through good and lean years, quietly going about his job as a professional for two decades and giving the Reds faithful something to be proud of.

Even more so, though, I'm happy for myself as a fan. When Larkin's plaque goes up on the wall in Cooperstown, a piece of my childhood will be there. Sure, there are plenty of other guys I remember fondly already in the hall, but Larkin is the first (and, in the end, only) guy from my favorite team from the time when baseball was, to my mind, the most important thing in the world.

He's a piece of that 1990 championship team. When he's inducted, my mind will turn to other players from that team I loved so much -- Eric Davis, Jose Rijo, Tom Browning, Paul O'Neill, Chris Sabo and the Nasty Boys, Rob Dibble, Norm Charlton and Randy Myers.

For various reasons, though, Larkin was the only one of those guys in Cincinnati long-term, and he's the only one who'll end up getting the call.

And so when that day in the summer of 2012 comes and Larkin is on that stage speaking, my mind will be in the fall of 1990. Baseball has a certain magic to a nine-year-old boy that the rest of us can't completely understand.

To be that age and see your team hoist the trophy is truly special.