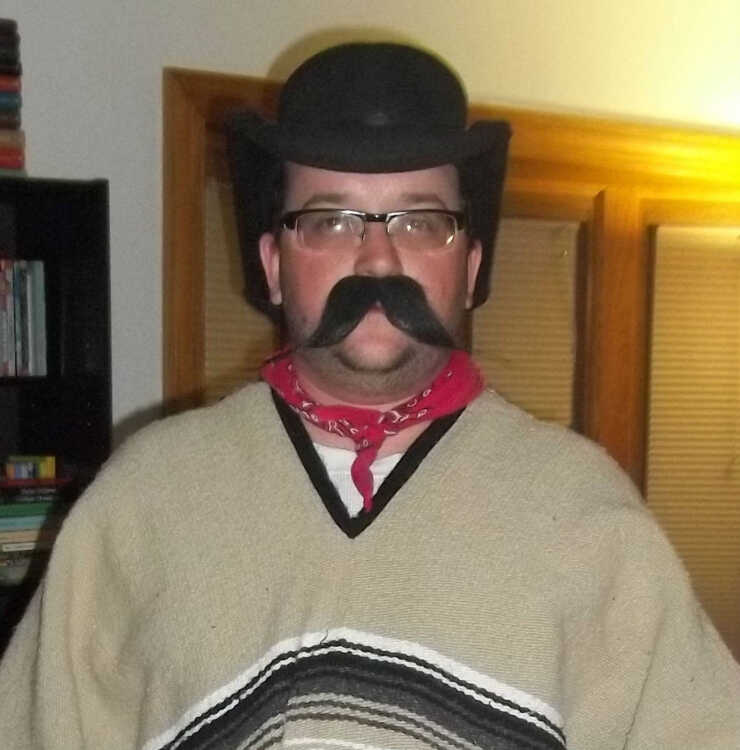 Seriously, I am smiling.

Not much to say here -- the picture speaks for itself. I will make a few observations, though.

-- Fake moustaches are not ideal attire for a karaoke party. Every time you take a big breath, you spend the next two stanzas gagging on synthetic whiskers.

-- If your fake moustache just hangs listlessly below your nose, Vaseline works nicely as a synthetic moustache wax.

-- No matter how much your Southwestern-themed Halloween costume might inspire you, "Pancho and Lefty" is not a good choice of karaoke songs. It lacks the fire and you can't sing it as well as Willie. Avoid "El Paso" as well --- you sure as heck aren't Marty Robbins.

-- Fake facial hair has the same effect on people from ages 2 to 70. They look at you like you're crazy, but then compliment you on it.

-- Simple tasks such as drinking may be much more difficult than normal. I recommend ordering a Corona and a straw.

-- If you are entering a costume contest in a rural Indiana tavern, this outfit (referred to by the locals variously as "Pancho Villa" or as what you might call the Jets quarterback after a game played in the mud) is good enough to win second place and a 12-pack of beverages. I'd say that's not too bad since all I bought for it was a $3 lip covering.