I've got news up to my hubcaps 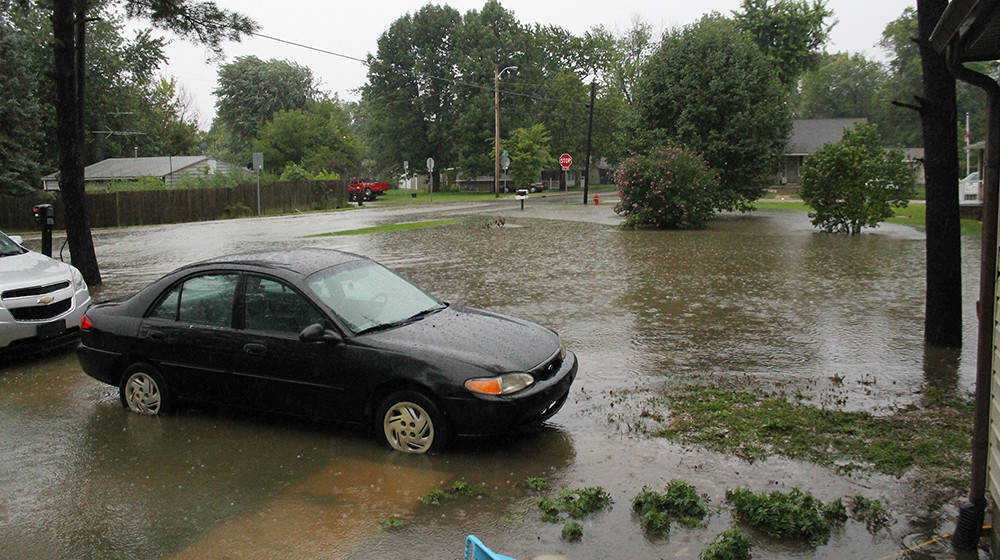 The high water on Saturday made my sister-in-law's car a star in the Monday Banner Graphic.

I was sitting at home on Saturday, happily enjoying a day without work responsibilities, when suddenly, news showed up on my doorstep.

More accurately, news fell from the sky and slowly began creeping up in my yard. News pooled in the low spots I've been trying to get rid of for these five years of home ownership.

News started really getting deep in the low spot straight out the front door and east of my driveway. Then news started pooling out in that spot where the weird fungus grows on the east property line.

Next I looked out back, and news was cascading over the sides of the gutters and even forming a river across the back yard -- an unprecedented event in the half decade I've been on Avenue D.

Of course, all of this time, I had yet to really think of it as news -- it was just rain, a torrential, batten-down-the-hatches downpour for the third time in a week.

When I again looked out to the driveway, and realized it was true: The news had found me on my day off.

For beyond the driveway was more than two feet of water in the neighbor's yard.

A storm drain had clogged in the deluge and water began backing up. It backed up into the street. It backed up more than a foot onto the wall of the neighbor's garage.

Most importantly to me, it backed up into (and across) my driveway. The standing water never really reached my house, but it began climbing our vehicles. My truck (a 4-wheel drive Dodge Ram that practically requires a step stool to enter) had water just a few inches from its door.

So the first order of business was to pull vehicles to other parts of the driveway where they weren't parked downhill.

And then it was on to taking pictures. I snapped the first one from the porch before making a half circle around my neighbor's house, getting all angles.

It's not often that work involves me wading through water in flip flops and gym shorts, but I sure as heck wasn't putting on dress pants for this. A bow tie? Forget about it.

So I finished my rounds. Ten minutes or so out in this stuff was enough, but I figured I had something good for the Monday paper. It had been worth it.

Then I got in here on Sunday, and Eric's favorite was the very first one I took. Apparently I never even needed to step off the porch and wade through the chilly water. Oh well.

It's not like I can complain too much. The cars are fine and the yard is slowly drying out. I don't have a basement, so there was no interior flooding to worry about.

My friends at the All-American Karate Academy were not so lucky. When we showed up for my son's Little Ninjas class on Tuesday afternoon, owners Steve and Niki St. Pierre were still moving equipment and furniture, drying out carpets and piecing back together the puzzle the karate mats had become.

Three days of cleanup and there was still work to do.

All this on the heels of last winter, when accumulated snow and ice began to melt and percolate down through the roof of the old Greencastle Marsh Building, causing many of the same problems for the karate school.

Two floods in less than a year? Now that's a roundhouse kick to the head.