Over and Dunn with 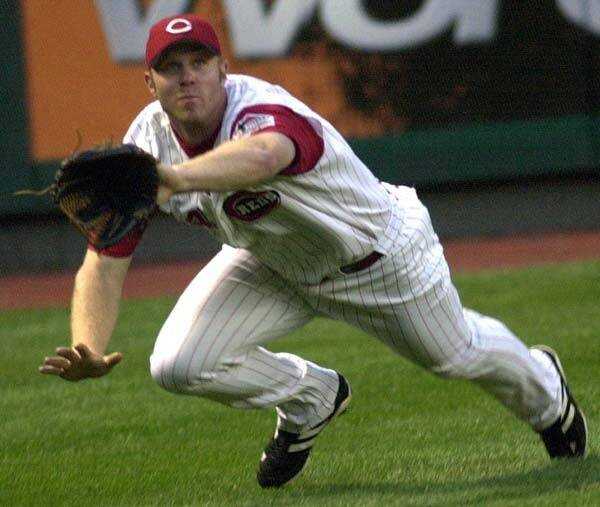 Much like his career, I can't imagine this play ended as Adam Dunn would have liked.

Having watched (a decent amount of) an absolute postseason classic on Tuesday evening, I sit here this morning basically happy.

I'm happy for the long-suffering Kansas City fans, who had to wait 29 years to get back to the postseason.

I'm happy for baseball fans (myself included) who were reminded of the resilience of these teams we love to watch. Did anyone really see the Royals' 9-8 win in 12 innings coming after they trailed 7-3 with only six outs remaining? (I didn't. I originally turned the game off in the sixth in favor of reading.)

I'm happy to have an all-waterfall matchup in the ALDS, pitting Kauffman Stadium against Angel Stadium of Anaheim.

(I'm a fan of the Royals on both the team and stadium front, in part because the "of Anaheim" suffix annoys me.)

But I can't help but also be a little sad this morning, not only because the next four weeks probably won't hold another game as good as last night's postseason premiere.

No, I'm sad for veteran slugger Adam Dunn, who suited up as a Major League player for the last time on Tuesday. And before I go any further, let me say I was never a fan of the Dunn era for my Cincinnati Reds. He was a butcher in the field and he struck out WAAAAAYYY too much.

But here's the thing about Adam Dunn: He was never a problem. He was just a good dude who came to work every day and played the game. No controversies. No complaining about the bad teams he played on. No grumbling when fans and media types were grumbling about him.

I've come to regret how I felt about Adam Dunn, who is a good dude even if had too many strikeouts.

All he did was swing really hard, walk a lot, strike out a lot and hit a ton of home runs -- 40 or more in five straight years, and exactly 40 in four straight years, weirdly enough.

Fourteen years into his career, Dunn even got his first appearance as a relief pitcher back on Aug. 5, a few weeks before he was traded from the White Sox to the contending A's.

On Tuesday night, after 14 years and 2,001 games, the Big Donkey suited up for his first postseason game. Unfortunately for Dunn, manager Bob Melvin left the DH out of the lineup. When the A's lost with Dunn making no plate appearances, that was it. Dunn had announced his intention to retire some weeks back, and he reiterated last night.

So that's all she wrote for this guy. He can't even say he ever played in the postseason. At best, he had a really good seat to watch one of the best playoff games of recent memory.

I'm not mad at the Royals or at Bob Melvin or anyone else. It's just a sucky way for a good career to end. After 462 home runs and 1,168 RBI, I would have enjoyed at least seeing one more Dunn pinch hitting appearance.

So what if he struck out? That was always the chance you took with Adam Dunn.