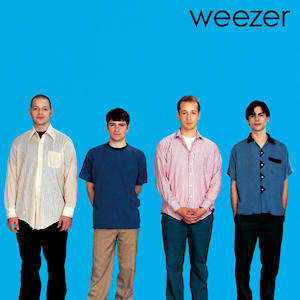 While driving around yesterday listening to Weezer's Blue Album, I had a rather lucid moment of self-awareness. After safely parking my car (of course) I picked up my phone and shared my observation with the Twitterverse:

If anyone notices, I’m the nerdy 37-year-old in the sensible, inoffensive sedan, blaring @Weezer’s Blue Album as I drive around town.

That's right, other people's demographic may be Van Halen in a Camaro or Canned Heat in a VW Bus, but after more than 30 years of trying to be "cool" in the conventional sense, I realize now that I'm firmly a dork rock in a Toyota Corolla kind of guy.

And that's OK -- perhaps cool in its own way.

Either way, Weezer -- particularly on the first two albums -- is a really good band and one that my family shares. My wife was also a fan before we got together. Now we're getting the kids on board.

So, when we're listening to the Blue Album, we all have the songs we need to hit. For Nicole, it's "Buddy Holly." Miles started out that way, but I think he's moved on to "In the Garage" as his favorite. I have always been a "Say It Ain't So" kind of guy.

Like seemingly so much of the rest of the world, they both like "Undone -- The Sweater Song." I've personally never understood what the fuss is all about, as I'd rather listen to about 75 percent of this album and pretty much all of "Pinkerton" instead of that song. I don't like that it does that weird talking thing that certain alternative songs like Nada Surf's "Popular" and this stupid song did. For the record, Pavement did the weird talking song better than any of their peers.

Back to Weezer, the shared family favorite seems to have become "Surf Wax America." The song seems to cove so much ground in its studio runtime of 3:04. It's fast, then it slows down then gets fast again. It's joyful but a little sad and a little more angry all at the same time.

Miles has taken to singing the "All along the undertow..." harmony part while everyone else is singing "You take your car to work...", which -- I think -- shows a pretty cool level of understanding of how the music works, for a seven-year-old anyway.

And then there's Hannah, our three-year-old. I don't know that she's chosen a favorite from this album, but when this song comes on and I ask Miles which part he wants to sing, she refused to be left out, yelling "I'll take my board!" from the back seat. I'm not at all proud.

I also took a moment yesterday to realize the lyrics Miles was singing. The original is "All along the undertow / It's strengthening its hold. / I never thought it would come to this. / Now I can never go home."

It turns out, Miles had that three-quarters correct, but he was singing "All along the undertow, escaping through the floor."

It's hard to argue with that.

So, anyway, here's a live version of the song. Enjoy your weekend, folks.