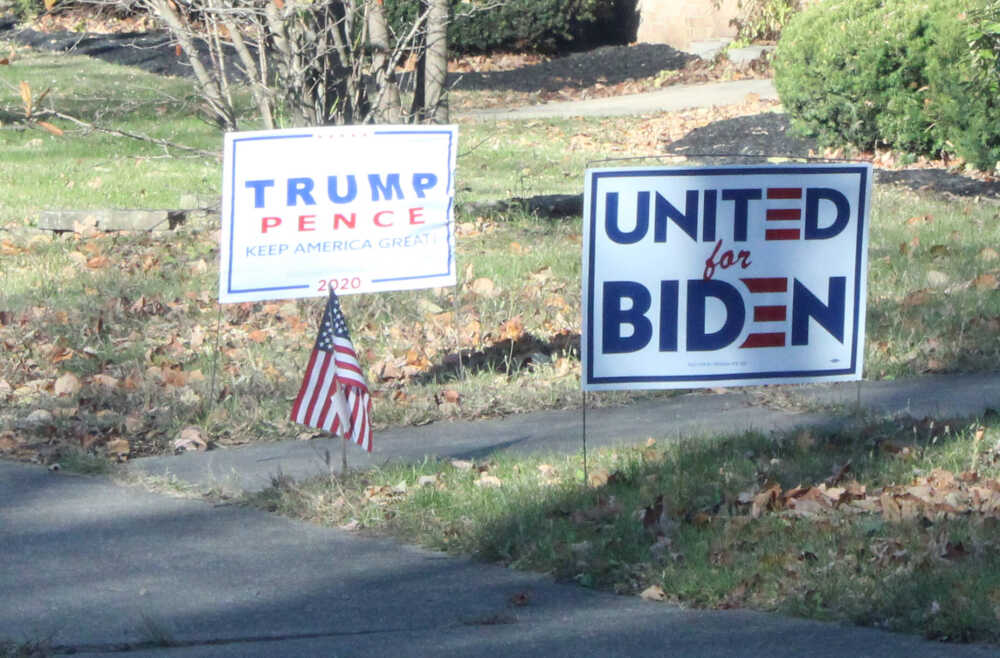 Two competing signs at one house on East Washington Street make for a lot of unanswered questions.

While driving down East Washington Street recently, I find that I’ve been chuckling to myself.

If you drive the street often, you’ve likely noticed the same house that has me smiling.

To the west of the front walkway is a “Trump Pence: Keep America Great” sign. To the east? It says, “United for Biden.”

I really wonder what the story is inside that little house with the arched door.

Is it a husband and wife who blissfully check their politics at the door when they arrive home each evening?

Did one of the inhabitants place one (or both) of the signs there on a dare?

Should someone check and make sure everyone inside is OK?

Unfortunately, it’s a story I might have been able to share with you all had I asked the questions a little earlier.

It does, however, make me think of another story — one in which I can get most of the details correct for you. I say most because it happened almost 90 years ago. You’ll forgive me in the spots where I have to take a liberty or two.

Two young girls — Martha Louise and Bonnie Fay — best friends for as long as they can remember, are on their way to school in Mellott, Ind., in the 1930s.

Martha, coming from a Republican family, wears a button of her favorite candidate. I don’t know the office or the candidate — could have been Alf Landon running for president or maybe Raymond Springer running for governor.

For all I know, it was someone running for Fountain County clerk or Mellott dogcatcher.

But it was definitely a Republican. Of that there is no doubt.

Unfortunately, Bonnie comes from a Democrat family and doesn’t like the candidate or the button. She let’s Martha know about it.

They commence to argue, as young girls will. The only thing is, these two girls don’t tend to argue.

“It’s the only fight we’ve ever had,” Bonnie told me on the occasion of her 80th birthday party. Having known the two women my whole life, I believe her.

They were fighting on this day, though, at least for a little while.

Yet some of the morning passes, feelings are hurt but not that hurt. The two girls decide it’s not worth it and they make up.

As a peace offering, Bonnie asks if she can wear Martha’s button for the rest of the day.

It’s a nice, tidy ending, right? Only it’s not quite the end.

That just so happened to be school picture day. Bonnie’s parents had outfitted her and twin sister Betty in matching outfits. When the school pictures arrived, the girls were an adorable, matching pair ... except for that damned Republican’s button on Bonnie’s dress.

And that’s when the real trouble started...

But I’m not here to talk about Bonnie’s parents’ reaction. I think we can all figure out how that went.

Martha and Bonnie, the two children in the story, are our examples. They set it all aside. They decided their friendship and their love for each other were much more important than the results of an election.

Martha was my grandma. She died on Feb. 27, 2018. Bonnie remained her best friend to that day, through the Great Depression, World War II, the loss of both husbands and three children between them, dementia and nearly a century’s worth of election results.

They loved each other through it all, regardless of what was going on around them.

Bonnie passed away this last Friday. We all called her Aunt Bonnie even though there wasn’t one drop of blood that bound us. Sometimes family is about something more than blood.

They’ll bury her on Wednesday. As they do, I’m going to have a lot of thoughts going through my head. Stories about sitting on her front swing talking, other stories that I know even though they happened long before I was born.

And, yes, I’ll also be thinking about the condition of our nation as we react to whatever the heck happened in this election. I’d like to think national affairs wouldn’t intrude on an otherwise personal moment, but I know better.

I don’t know what the coming days, weeks, months will hold in our country, but I do know that we have to go on living with each other no matter what.

Your family/friends/coworkers/neighbors are still humans, worthy of your love and respect. Treat them as such.

If two little girls can do it — and keep it up for another 80 years — then I pray we’re all mature enough to give it a shot.