BLOGGING ON SPORTS
Joey Bennett
Joey Bennett has been the sports editor of the Greencastle Banner Graphic since April of 2016. He was previously sports editor of the Greensburg Daily News from 1984 to 1988, and worked for more than 20 years at the Terre Haute Tribune-Star. He also taught high school and middle school English for 14.5 years. He loves sports, and goes to a game or two once in a while.
Recent posts
Archives

Symbolism is a matter of perception, even in sports 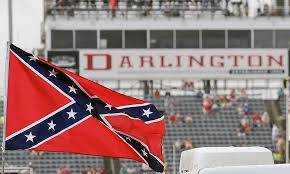 Symbolism is a common theme in literature, whether it's deciding if the yellow brick road is a metaphor for riches in the "Wizard of Oz" or if the green light at the end of Jay Gatsby's dock in "The Great Gatsby" represents his hopes and dreams for the future.

Sports is not without its symbolism, and two very well-publicized examples have been dominating the sports world since there are very few actual events taking place.

One potentially ugly one reared its head recently with the decision of NASCAR to ban the confederate flag from its races. (Definitely a task that seems much easier said than done, but we will see how that goes.)

When I taught middle and high school English, I frequently used the confederate flag as an example of how many different ways people can look at the same thing. Is is a representation of the evils of slavery? Is it a way for people originally from the South to acknowledge and show pride in their heritage? Is it merely a symbol used in the General Lee car in the "Dukes of Hazzard" to show a combination of those two factors? Or were they rebellious in nature, and wanted to show the "Rebel flag" to let everyone know that fact?

It's all in the eye of the beholder. I had students that I taught who would frequently wear T-shirts and belt buckles or have stickers with that symbol on their notebooks. I asked why they had that symbol, and they would always say "Southern pride"! There were a few who I knew were actually from the South and had moved to Indiana at some point, and for them that answer seemed fitting. Sadly, I had a larger segment which (based upon things unintentionally overheard) I was confident were actually racist in their beliefs but used the "Southern pride" thing as a cover. In no way did any of these students get in trouble, at least from me, for displaying this symbol.

It seems like one of my schools actually banned the symbol at some point, and the cries of "censorship" were plenty from that faction of the student population.

My stance was always that if any such symbol had ANY offensive meanings to ANY groups of people that they should be disallowed. That stance has not changed in terms of NASCAR's decision in my eyes. What percentage of the fans are white? Certainly a huge percentage. Same for drivers. But to prevent anyone from feeling offended by the notion of their ancestors being subjected to the horrible conditions of slavery, I applaud NASCAR for its stance.

As we all know, however, money talks. If a large number of fans stay away in protest and costs the organization a lot of money, we may very well see the symbol return. I just can't believe that it is so important to people that they would limit their own entertainment options, but I bet it happens. This will be an interesting situation to watch, for sure.

The other one, even more commonplace and controversial, involves athletes and/or coaches kneeling during the national anthem to protest police brutality. In spite of the fact that numerous veterans have applauded this action as being what they fought for, many people have viewed this action as being a protest against our country, our veterans, baseball, apple pie, Uncle Sam and anything representing our country.

Those people have the right to take that stance, but I have seen zero evidence showing that's why the players are kneeling. Perhaps the "these football players hate our veterans" people have some special psychic abilities which allow them to interpret the thoughts inside of the heads of anyone protesting in this manner. I have chosen to listen to the people who have kneeled, heard their reasons, watched the news and formulated my own opinion -- which is that the ability to make such protests is what sets us apart from other countries which control the lives of their people.

Whether it's confederate flags or kneeling, sports has proven too important enough of a stage to be used as a venue for making change. I consider that a good thing.