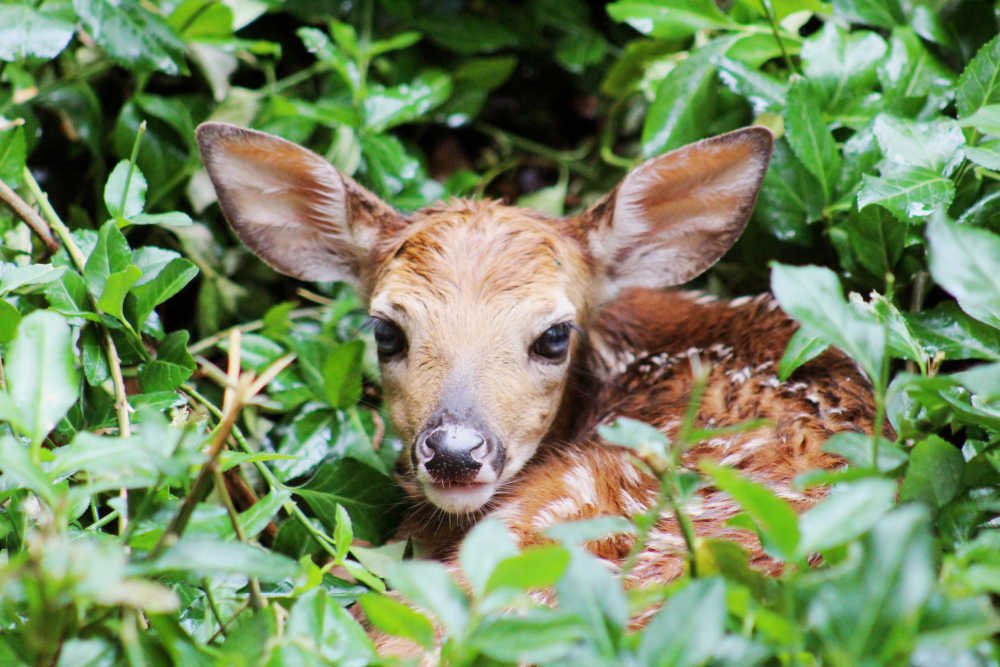 Growing up in the Chicago suburbs, one of the great delights of my youth was listening to WLS Radio and particularly disc jockey Larry Lujack and his "Animal Stories" segments.

And as I have grown older, I'm encountered my share of my own animal stories. The snake in the basement ceiling. The groundhog in the hot tub. The squirrel in the attic. The bat in the bedroom. The raccoon-dog fight to the death on the deck.

This time it's the fawn in the flowerbed.

Let me first state no animals were injured in the making of this story.

But in between major thunderstorms the other Sunday, I was returning home from stocking up on quick meal items from Kroger and iced tea from McDonald's when I spotted the head of an animal pop up from the bushes beneath my dining room window.

Since neighbors on both sides of me have cats that like to roam and make my vegetation their home, I figured it was one of them and cursed its existence. After all, being allergic to cats (along with strangely enough mustard and eggs) seems to make felines inexplicably find their way to my house.

My hands and arms full of dangling plastic Kroger bags, I stepped out of the Jeep to see the animal in front of me suddenly stand shakily and reveal itself as a newborn fawn. Feeling like Marlin Perkins in the Serengeti, I couldn't resist firing off a few photos with my cellphone (which rarely works on such occasions), all the while wondering if Mother Deer was going to come charging out of somewhere to knock me on my backside.

But with no adult deer anywhere near, I calmly walked to the back door and dumped my groceries inside so I could return to the car and grab the digital camera for a better shot, which is the one accompanying this article.

I tried to get ahold of someone from DNR or a conservation officer to come out and assess the situation but no one ever returned my call or text. I didn't want to pick the little guy up or move him for fear the mother might shun him if she did come back.

Worried that the fawn had been abandoned, and was now easy prey for the coyotes I've heard have stalked our area, I nervously checked on him every few minutes to find him safely curled up in the bushes beneath the dining room window. Even named him "Stormy" since he was riding out the wild weather.

He was there the next morning and the next after that. He didn't seem distressed at all and was apparently getting plenty of water, no doubt, from our torrential downpours. I tossed him a couple pieces of bread and part of a mushy banana but I was never sure whether he ate any of it or not. For three days there was never a sign of the doe, which I had seen a week earlier in the clearing in my side yard in all her pregnant splendor.

It got so Stormy was like a member of the family. He was comfortingly there whenever I looked for him. The dog didn't seem the least bit interested in the fact there was another animal five feet away from him when he went outside.

And then on the fifth morning, I looked out the window at first light and Stormy was gone. Just a mashed-down outline of his little body in the bushes was all that remained.

And as I left for work that morning, Stormy was nowhere to be seen ... but another bigger sunken spot in the bushes indicated a larger animal had made its bed there overnight. So I assume there somehow was a happy doe-and-fawn reunion, although I still look for Stormy in that spot under the window every time I come or go.

So, as Little Tommy always used to ask, "Is Stormy OK, Uncle Lar?"

This has been another edition of "Animal Stories" ...