Their blood is on my hands 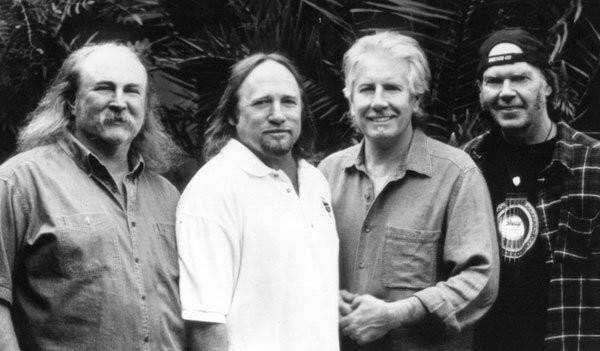 We are stardust, we are golden, we are billion year old carbon,
And we've got to get ourselves back to the garden.

During a recent newsroom conversation about 1960s and '70s music, a remarkable thought came to me -- all four members of Crosby, Stills, Nash & Young are still alive.

On the surface, it's not that remarkable -- four men between the ages of 69 and 73 still kickin' isn't that weird in 2015. Hooray for modern medicine!

But it's not so much the modern medicine I'm thinking about so much as the, shall we say, self-medicating that these folk rockers were doing back in their heyday.

Just think about the drugs, alcohol and cigarettes, along with the plane rides, fast cars and motorcycles (and ham sandwiches) that have claimed countless other rockers over the years and it's hard to imagine that CSNY is still four-for-four.

The Beatles are half gone. The Who are also at 50 percent (although only Keith Moon actually died before he got old). Only two of five members of the Band remain. Even one of the seemingly clean-cut Monkees has passed away.

But as usual, I digress.

The real story here is that I verbalized my observation:

"Hey, does it seem weird that all four guys in CSNY are still alive?"

An audible gasp rose from Kyle and Eric as I covered my mouth, trying to take the words back.

Because you see, I'm the kiss of death at the BG office. A sort of journalist, pop culture grim reaper.

It's a running joke several years in the making, but it's gotten really bad in the last year. While exploring some topic on the Internet, I'll note, with surprise, that some famous person (generally much older than 70) is still alive.

After that, within a week or two, they've proven me wrong. I'll come in to the office to the judging eyes of my co-workers as they inform me that Mickey Rooney died.

During 2014 alone, my offhand observations claimed Shirley Temple, Rooney, Eli Wallach and Ben Bradlee. And while I knew Joe Cocker was alive at the time, I made a joke about it in this Sept. 19, 2014 blog and Cocker died in December.

Also, Eric likes to blame Richard Dawson's 2012 death on me as well, but I never made the observation until after he died. I thought he died in the '80s, as did my accuser. SURVEY SAYS... not my fault.

Regardless, this has just gotten weird. I should be banned from Wikipedia.

So let's avoid a similar fate for our favorite folk supergroup. We should all drink to the health of David Crosby, Stephen Stills, Graham Nash and Neil Young. Although if any of them want to take part in the toast, I'd suggest they drink something healthy like milk or juice or maybe water.

(And also, in trying to avoid any sort of faux pas, I've googled each of the members. No critical illnesses. No recent injuries. Here's a quick rundown of what I learned: Crosby thinks Kanye is an idiot and a poser ... Stills and Young are set to perform together at the former's annual autism benefit in April (although Young plans to never play with the full CSN lineup again) ... Nash seems to be as much a photographer as a musician these days.)

Also, while the original CSNY conversation was in no way related to this event, if you're reading this prior to 7 p.m., Tuesday, March 10, then get your hippie butt over to Chief's at 5 E. Franklin St., Greencastle, where local musicians Chris Wurster and Bobbie Lancaster have organized a Crosby, Stills, Nash & Young tribute show to benefit The Castle.

Read about it here.