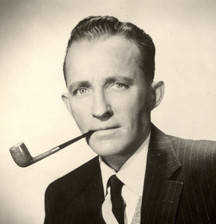 Was Bing a peacenik? Maybe a little.

This morning when I woke up, I was starting to compose this post in my head. So when I went out to start my wife's car, I was amused to find that "Do You Hear What I Hear?" was playing in the car

It might have been by Carrie Underwood. I'm not really sure.

What I am sure of is that she was oversinging it, and I was not enjoying it.

(Quick side note: I'm not just joining in Pick On Carrie Underwood Week. I thought she did an admirable job in "The Sound of Music.")

It made me think first of Whitney Houston's version of the song from the 1980s, which I've pretty much always thought was overwrought and entirely too long.

The version is overproduced to the point that Houston covers only three verses in about 3 minutes, 30 seconds, while Bing Crosby covers four verses and doesn't top the 3-minute mark.

Why is this, you ask? Because Bing applied his own "voice as big as the sea" to the songs, but otherwise stayed out of the way of the message.

It was never about verbal acrobatics. He let great songwriting speak for itself.

And this is outstanding songwriting. Besides being an excellent, modern retelling of the nativity story, it also had a very real, contemporary message to the audiences that heard it in the 1960s.

On the surface, it's a very linear, almost childlike, story of the message of Christ's birth traveling from the night wind, to the little lamb, to the shepherd boy, to the king and then to the masses.

But wrapped up in that story is a call for peace at a time when people the world over feared that a few destructive leaders could destroy the world with their carelessness.

The song was composed by No'l Regney and Gloria Shayne Baker in October 1962, during the tense days of the Cuban Missile Crisis.

So when the mighty king commanded, "Pray for peace, people everywhere," it was not simply a call to a first-century audience in Christ's time. It was a call to all people in all nations, in the 20th century.

Crosby's 1963 version was released into a world where the Cold War still raged. Appearing on Bob Hope's Christmas special that year, he shared Regney's and Baker's message of peace with the world.

The song was the message, not Bing's voice. He never got in the way of the song.

For your listening pleasure on Dec. 11: "Carol of the Bells"