'Hamilton' a one-time thing for me 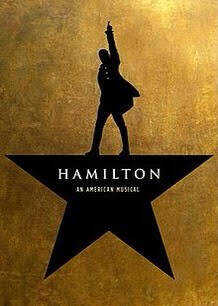 (OK, this isn't sports but those topics have been done enough for now and the will we/won't we reopen debate will never end until they do or don't.)

I am hardly an afficionado of Broadway musicals, but in the last half of my life I've gotten more into this genre. My wife and I have seen "Wicked" and "Book of Mormon" twice each and "Beautiful: The Musical" once, and probably some others I can't remember. We are regular season ticket holders at the Community Theatre of Terre Haute, and have also seen several high school productions.

My wife went to see "Hamilton" in Indianapolis with her sister sometime last year, and I was unable to go, and wasn't really sure I wanted to. Disney+ has added a filmed version of the hit musical to its lineup, and we watched it over the weekend. She said while it's always better to see things in person, their seats were pretty far away and she could see facial expressions much better on TV. (I have always wondered why more musicals aren't filmed and shown on TV, and that's a really long story with a not very logical ending.)

Anyway, I knew the general theme of the story and that it was 100 percent songs with no spoken lyrics. I am not a fan of rap music, although this kind was far different in its tone and meaning than the kind I really dislike. I found it interesting to watch, and I'm glad I saw it, but I won't be going back for a second viewing. I didn't like it that much. I write this knowing I am in a huge minority based upon people I have talked to or who have written their online reviews of the show. Some of my friends said they had watched it five times in a row (taking about 13 hours out of their lives), and they were "brought to tears" at the end of it. I know history fairly well, but not at an expert level. I could follow the story pretty well, except when remembering which actor was playing which character.

The major players were easy to tell apart, and they tried to throw in some hints by having a character sing a new one's name when they were introduced to them, but it was still really hard. And it became especially difficult when my wife pointed out that some actors played multiple characters. "Hey, wasn't that guy just Jefferson?" My wife was very patient when I would ask every few seconds "Who's that?" but it just took away from the overall viewing. My dad used to say "You can't tell who's playing without a program" and this show definitely needed a program for me.

It was a noble decision to have so many minority actors to portray what was obviously an all-white group of people, and they were all talented. I realistically liked about one third of the music, and many of the singers were excellent. The female singers were the best ones, in my opinion.

While I like knowing something about a movie, musical or play before watching it, I sometimes wish I didn't hear all the hype attributed to some of them. (Kind of like the movie "Joker", which I also watched recently and also didn't live up to the advance hype in my opinion.) Unfortunately, "Hamilton" didn't live up to an even bigger amount of hype to me.