If I can be a little more like Ernie Pyle 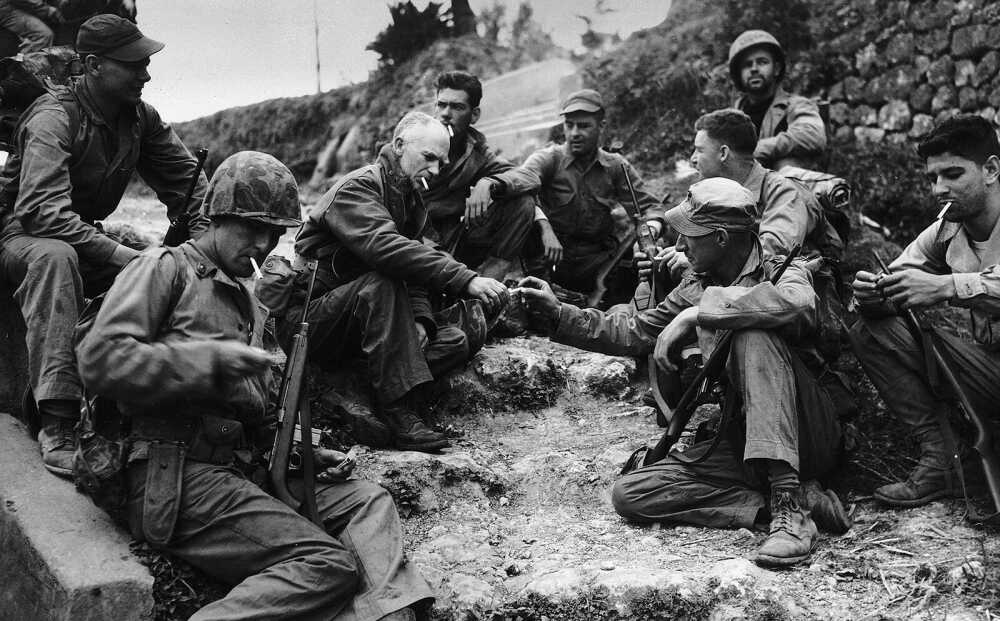 Ernie Pyle shares a cigarette with a soldier on Okinawa in April 1945. He was killed by a sniper on Iejima a few days after this photo was taken. (Courtesy U.S. Marine Corps)

Last Saturday, I did something I maybe don't do enough now. A lot of the time, I will come into the office, do obits that've come in and maybe write up a caption or a story.

(Maybe this is how I mitigate boredom or want to feel productive when not otherwise.)

Taking advantage of the great weather, not thinking much about missing a big fire or wreck, I put the top down on Rocky and went out to the sleepy town of Dana, located 16 miles west of Rockville and the birthplace of one of America's greatest journalists. I'm not sure what my expectations should have been, but the drive was well worth it.

I'm not totally facetious about the "sleepy" part. I went because there was a car show as part of the annual Ernie Pyle Fireman's Festival. I thought I was going to something like the Back to the Fifties Festival in Lebanon. That bustle isn't what I found, though.

Granted, I didn't regard how small or notable Dana would be, other than being where Pyle was born. I am told it is where my Uncle Bill and Aunt Sherry on my mom's side lived once. It is also where the late longtime DePauw PR director Pat Aikman grew up.

While the car show was decent, my pulse was that the atmosphere was "dead," for lack of a better descriptor. Once I found a parking spot and walked down Maple Street, I came to Pyle's childhood home and went in, inadvertently to a tour that just started.

The house was interesting, but the stuff about Pyle's work as a correspondent during World War II was in a quonset besides. I hate to say I pretty much blew through it.

However, the exhibit stuck a thought with me: Pyle wasn't just respected, but loved.

Pyle's intimate, rough-around-the-edges storytelling, honed writing columns about ordinary Americans and their daily lives, was told from the soldiers' perspectives. He brought the war and its toils home. He was indeed there and "doing it" with them. The columns he wrote during this time are pinnacles of what we reporters call "soft news."

But he still began as a reporter for the LaPorte County Herald, having left Indiana University for the job before he could graduate. I may be a little more than four years into this, but he was a cub once, too. But perhaps he was not much different from me.

"Death is death," the museum person, whose name escapes me now, said about Pyle and the war's reality he detailed to newspaper readers. "But it's still about the effort," I responded in kind. Now, where and when have you heard that out of me before, eh?

But I am absolutely serious, here. I am not at all suggesting that my covering school boards, town councils and the occasional (though sometimes tragic) wreck or fire has more stakes than Pyle's work did. He was killed by a sniper in the Pacific theater, a few months before the Japanese surrendered. You could say that he gave his full measure.

The 77th Infantry Division, which Pyle was with when he was killed, put up a wooden monument to him that said it had, "lost a buddy." That is rather jarring to me in a way.

Talking recently behind Greencastle Fire's station with firefighter Jimmy Shaw about covering his fire and rescue class at Area 30, and even truly "doing it" with them, he acknowledged me putting in that effort to be there, no matter what it may be about.

That isn't something I get very often, whether or not people want to say "Good story" or even to criticize an error. It can be hard for some things to not be personal, or to get attached. I'm sure Pyle grappled with this as he humanely relayed what he witnessed.

But as I think it was for Pyle, relationships, as they cross between interpersonal and professional, as well as being there, are still the core of what I do and can accomplish.

I told Jimmy that whether I'm still here at the Banner Graphic five years from now or gone the next, I want to be remembered by those I have worked with, especially our first responders, as that reporter who's "done the thing," and gotten up close doing so. We might not be on the same team, but work together and see each other as people.

That is perhaps the inspiration to take from Ernie Pyle. He connected with and earned the trust of the soldiers he followed. Maybe he was also aware of where he came from.