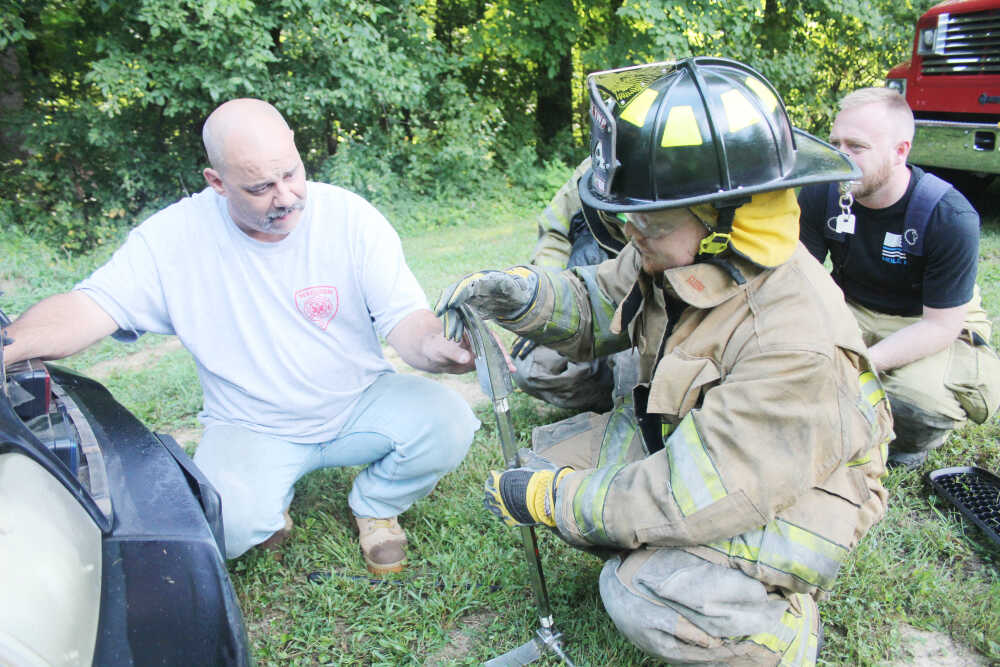 An almost-absolute sentiment in the fire service is that volunteers are — and have been — a dying breed.

For longtime Madison Township Volunteer Fire Chief Lee Price, the issue is twofold: Youth don’t want to volunteer, and the rest are getting old.

What perhaps many don’t fully grasp is that much of it comes down to money. This isn’t being cynical. All fire departments like ours grapple with capital.

In a recent interview, Larry Curl, the main lobbyist for the Indiana Volunteer Firefighters Association, put the basics as he sees them down to this: Volunteer fire departments need to improve their staffing, funding and training overall.

According to Curl, there are about 13,000 volunteer firefighters in Indiana, down from 17,000 just a few years ago. Though this may be due both to older volunteers retiring or dying and younger ones getting out, it’s a major reduction.

More to the point, Curl asserts that the volunteer fire service is truly not free. It costs heavily to keep volunteer departments running, including our taxes.

Locally, each of the volunteer departments was given $50,000 of the county’s allotment of funds through the American Rescue Plan Act. That’s a lot of money, right?

The ARPA money Madison Township VFD has received so far has gone toward new turnout gear for about $21,000. Meanwhile, $12,000 went toward new garage doors for the station to improve heating and cooling costs.

The department generally pays $1,600 a year to keep a fuel tank at its station full. Depending on the weather, it’s $750 a month during winter to heat the building with LP gas. Also include electricity and internet for run reports, record keeping and some training.

Madison Township VFD will receive $22,500 a year through a contract with the township, and roughly $10,000 of this goes toward insurance and general upkeep. It also gets a yearly $9-$10,000 cut for covering races at Lincoln Park Speedway.

Volunteer departments can get a disbursement from a cumulative fund by the township they serve. This covers various expenditures including pump tests, repairs and purchases which are approved by the township trustee. Nevertheless, this can be completely used up.

These funds aren’t, but shouldn’t be, equal across the board. The Cloverdale Township Volunteer Fire Department covers a large area plus incidents on Interstate 70. Madison Township VFD and the other volunteer departments will go on many fewer runs per month.

“People can see why fire departments struggle as a whole,” Price told me recently about the costs. “We all have the same needs. You gotta also think about the run volumes they do.”

(All of the volunteer departments’ annual financial reports can be found on Indiana Gateway.)

Volunteers are no different from career firefighters in their essence. Their gear and apparatus, as well as their conduct on the fireground, should be held to the same standards.

Even so, Price’s view is that he doesn’t need advanced equipment like battery-powered extrication tools or an aerial truck. This is because they are not essential in Madison Township’s purview.

In keeping to those standards, volunteer departments innately struggle with funding and buy-in from communities. Not all of them are their own entities, and as such each will have their different dynamics.

Ultimately, fundraising remains vital for all volunteer departments. But community support is lacking for some efforts while a relative boon for others.

Events like Fillmore VFD’s chicken barbecue and Cloverdale Township VFD’s pancake breakfast bring in critical dollars. But all of that revenue goes right into continually maintaining their departments.

Madison Township VFD stopped having monthly breakfasts because the small revenue wasn’t justifiable. In the same vein, the members will put their own money into the department’s upkeep.

“There’re taxpayers out there who think, ‘Well, all you do is go fight the fire,’” Price related. Looking strictly at the government funding, taxes on their own don’t go that far for fire protection.

This may get at the elephant in the room, and it may be attitudinal as it is still financial. For Price, there is a point of helping those who come to help the volunteer departments, including potential recruits.

An idea is that we should see our fire-related taxes as investments. As Price put it, advocating that his department needs a new engine is wanting to make sure it can take care of the community. He leans on those who live in Madison Township for their input.

In the end, the reality with volunteer memberships as they stand is that most my age don’t want to get into the fire service for no compensation. Going through 200-300 hours’ worth of training makes it more of a turnoff.

Seeing it up close as I have on fires and wrecks, I have immense respect for our firefighters and what they do. Price’s message otherwise is that people can learn more about, and reach out to, their local fire departments.

Though volunteerism in the fire service may be dire, I’m confident with Price that it can be revived. It can with our firefighters educating the public on what it all takes.

When that can be a priority, maybe more would get involved. It is public relations more than publicity.