2022: Things fall apart, but they can be rebuilt 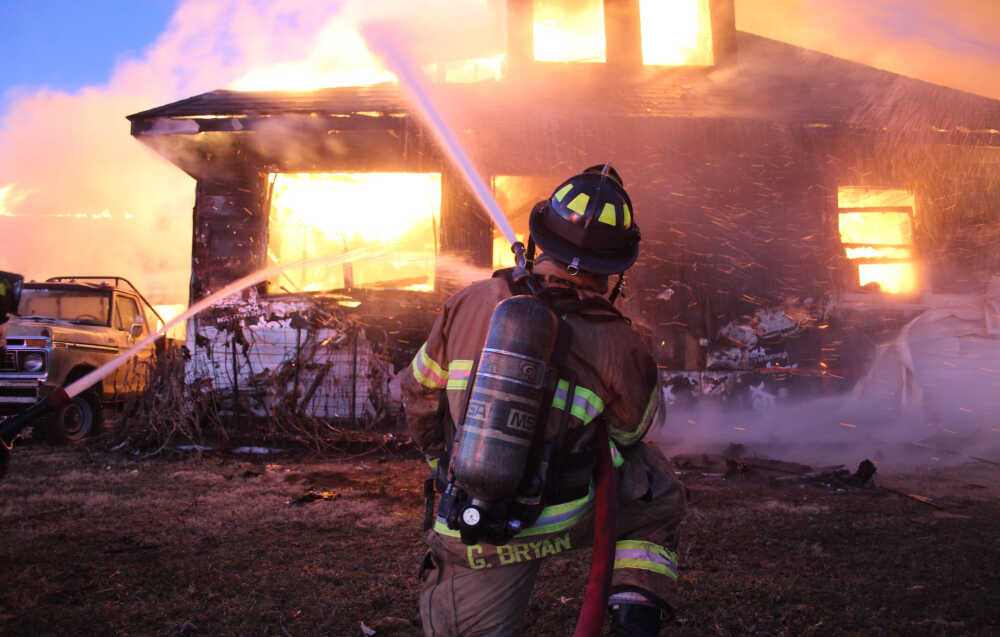 Greencastle firefighter Grant Bryan stares down a blaze that called crews and apparatus from across the county to Monroe Township on Christmas Eve. (Banner Graphic/BRAND SELVIA)

Wait a minute, engines and sirens, city all up in a roar/ Fire chief said, "Son, what'd you wanna do this for?"/"I'm sorry, sir, I just can't take it no more/You wouldn't have liked the man I was before." - From "Blew Up (The House)" by Jonny Lang

As I came up on the house fire that occurred in Monroe Township on Christmas Eve, as I saw the smoke and the flames, it was an "Oh shit!" moment for me as a reporter.

It was an almost-instant realization that this one wasn't a general box alarm. Crews and apparatus from across the county ultimately showed out, and in one of the most awesome responses I've ever been a part of covering fires for the Banner Graphic. I have never been more proud of all of our firefighters with the teamwork I witnessed.

But come back to the very real-life fact that the resident lost his home, as well as pets.

"There’s only so much we can do," Bainbridge Fire Chief Kevin Thorson summed it up to me. I watched as he and fellow firefighters were finishing organizing Engine 22's equipment. Icicles hung from the tailboard. I know all of us were simply exhausted.

Figure that Kevin was gracious enough to give me details on the response while doing this, at about 10:15 p.m. That's saying something about what I do. Maybe it shows just how entrenched I've become in the last year. It is having purpose, a want to be there.

As I then finished writing the story at 1:30 a.m., on a day imbued with meaning about family and hope, I sat back and looked at the photos I got. This fire made me stop and think about taking things and people for granted. It brought everything I've done into focus. In a way, it synthesized all of the challenges, and the successes, of the past year.

Those challenges began, but perhaps can't end, with fracturing my femur in January.

I have told many people that it wasn't the physical pain and limitations which defined me. Because of it, I had confrontations with myself as both a professional and, most especially, as a person. I'm not comfortable discussing some of this in a public forum.

I still shutter internally when I think about when a baby, as I looked directly at her, gave witness to malice in a human being for the first time. Because of not thinking about the consequences of my actions, I am sure that I hurt people I could consider friends. I consistently, perhaps often uncritically, felt I was being taken for granted.

Things fell apart. Though I hoped to never come to it, I fell from grace. Many of those things can never be what they were before I fell. Therein, I think, lies the silver lining.

Out of this consternation and ambivalence, I found that I cannot stand for someone who pretends to care about others' well-being. An absolutist ego should never endear one to respect. I have also learned that boundaries are critical to my personal grace.

I've thought that one really cannot make friends in this business. Discretion is still the better part of valor in holding those with clout, power and service accountable. But relationships, based on good faith and trust, still form the essential root of what I do.

This has been demonstrated in how close I've become with the emergency services, as fires and wrecks have become a beat separate from town councils, school boards and other events in variety. I take pride in showing their commitment, regardless if they are career or volunteer. Many have been good to me apart from the jobs we've done.

It is going out to a garage fire with a -35-degree wind chill. It is the five fatal vehicle wrecks I've personally covered in my time. It is rocking in Rocky on a brush fire, being out there in the action. #SmallTownPR is also going to the volunteer fire department breakfasts and the stories apart from my beat that matter. It's going out and doing it.

That is what makes me proud to do what I do. Despite the hard knocks, I keep going.

Just in the last few weeks, I've realized what it means to come out of a darkness like I experienced earlier on. This has been a time to reflect on how I and others can come through. Believing what I value to be clearer, I am ready for what can come my way.

I go back to how I think our first responders approach their duties, even in the direst of situations: It is okay sometimes to try and smile, and even to laugh, through it all.