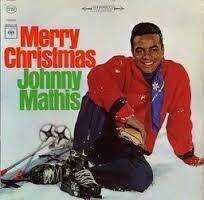 I wasn't much into crooners until much later, and even then, Mathis has never really been my taste.

But there's no denying that the man has made some pretty good (and wildly popular) renditions of Christmas songs over the years.

In the newsroom recently, we were discussing who would now be considered "The King of Christmas" among singers.

The debate was brought on when Eric told the story of an interview he once had with Martinsville's Bobby Helms (he of "Jingle Bell Rock" fame). The talk came at some point after the death of Bing Crosby, so Helms said something along the lines of "I figure now I'm the King of Christmas."

Whether or not he was correct, we can't debate the fact that Helms has now passed away, as have Crosby, Frank Sinatra, Mel Torme, Nat King Cole, Perry Como, Andy Williams (conspicuously absent from this countdown), Burl Ives and Elvis.

I think Johnny Mathis might now be the King of Christmas. You have to say that he pretty much knocks it out of the park on this one.

And this one. (It's really good live, no less.)

And this one as well.

Maybe someday the crown will pass to Michael Buble or Harry Connick Jr. or someone I'm forgetting, but for now let Johnny have the title.

As for "What Child Is This?" I actually remember very little about the actual song.

What I do remember is that the record was scratched, resulting in an unintentional "locked groove."

If you were in the wrong part of the house, that noise could go on for a while. But if someone got there, a quick pound on the side of the stereo got you moving forward.

Don't let any of this sell the song short, though. Recalling this amusing (and weirdly specific) memory, I decided to give the song a good listen. It's outstanding.

Good work, Johnny. I'm glad to have finally discovered the final 3:50 of this song because it's pure gold.

Our Dec. 16 selection: "My Favorite Things"

Dec. 13: 'Have Yourself a Merry Little Christmas' -- Judy Garland

Dec. 14: 'The Twelve Days of Christmas' -- Tennessee Ernie Ford and Straight No Chaser