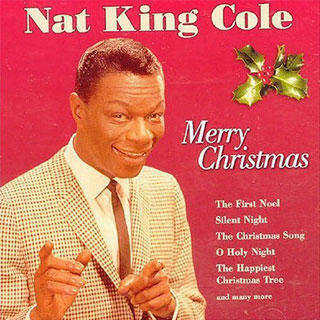 Nat says: "Merry Christmas to you."

My favorite thing about this song might be the audacity of the title. Mel Torme and Bob Wells were bold enough to name it "The Christmas Song."

It's not simply "Christmas Song" or "A Christmas Song." Considering the hundreds (thousands?) of Christmas songs out there, the use of the definite article is important.

They could have called it "Chestnuts Roasting on an Open Fire" (which it is often subtitled) or "Merry Christmas to You", but he instead chose "The Christmas Song."

Do I consider it the definitive Christmas song? No, but if this list proves anything, it's that I don't like limiting my options.

As for the singer of this particular number, Nat King Cole was the only option for me. I briefly considered Torme's version, but sometimes good songwriting is about passing the baton to someone else for performance.

And Cole was the man for the job. To paraphrase one of my favorite local musicians (who had actually been stumping for the Stevie Wonder version) -- Nat King Cole was a bad man. Killer piano player, singer, and golfer. It ain't fair.

It was Nat's world and we were all just living in it. (Well not me. He died 15 years before I was born.)

All the same, he offered a simple phrase to all of us: "Merry Christmas to you."