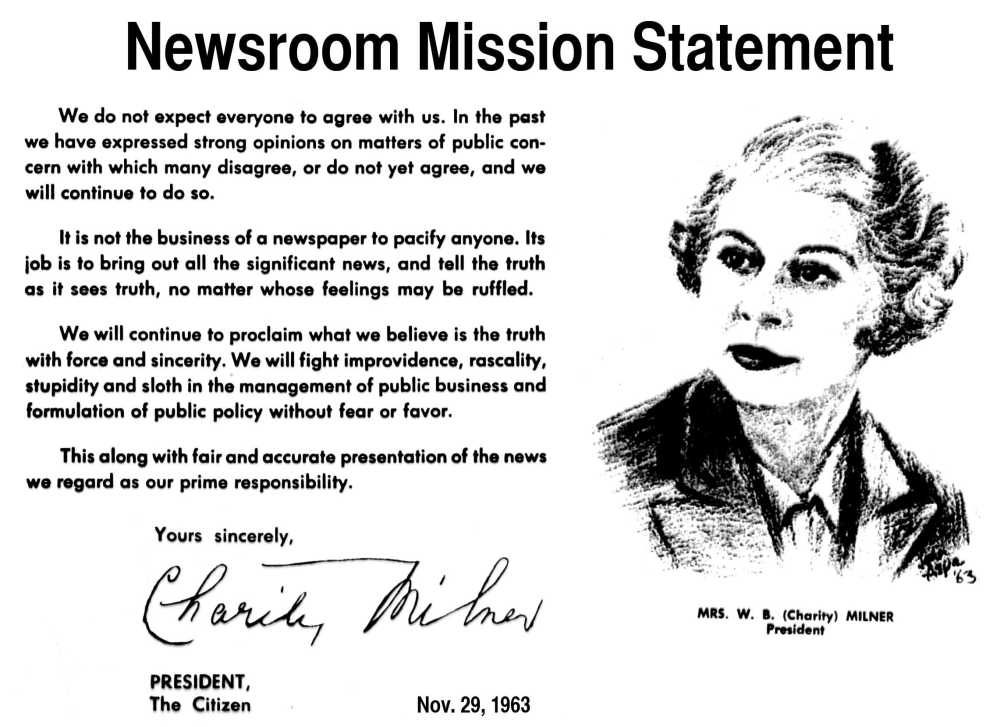 From the Citizen newspaper in Canada, circa 1963

Before I came in this morning, I had intended for this post to sort of be a reaction to some of the past week's bigger stories - both in and out of Putnam County.

However, I want to try and succinctly talk more about what being a reporter for a small newspaper like the Banner Graphic is like. I don't think a lot of people grasp how complex or fast-paced getting a story or managing the newsroom can be.

When I covered the chlorine leak in Bainbridge back in December, it was both at the same time. After I had been told that something serious was happening that Sunday afternoon, I high-tailed it to get whatever information I could. This was a story that could not wait, given that people near the Bainbridge Town Hall had been evacuated and that there was a real health concern.

When I got there, I found Putnam County Emergency Management Director Tom Helmer, who I would surmise had been at the scene not long before I arrived. With area first responders doing everything they could to plug the leak, I gleaned from Tom everything that he knew up to that point. I came back to the office and wrote up the initial story, and then posted it to our website and Facebook page.

It was brought to my attention the next morning by Jared that a firefighter who was on the scene had texted him, saying some of those initial details were not totally accurate. In the same turn, Jared also emphasized that the issue laid more in the information I had been given, and not the way I reported the incident.

I got to work contacting Helmer and first responders for more information, and fixed those details as I wrote the updated version. I think I covered it as best as I could given the circumstances, but our detractors would jump on this as getting the story wrong.

Though it may not have been exactly correct, I absolutely don't blame Tom Helmer for giving me "false" information. He was in the same boat I was in having the situation unfold right there in front of us. It was in the moment of what was an active hazmat situation. Nothing was guaranteed to be certain. It was what he had been told and what I was seeing which made up who was there and what was happening generally.

There are many scenarios, especially in getting out breaking stories such as the Bainbridge leak, where we are as good as the information we're given in the moment. There is an automatic expectation that we will get the story right the first time. I have learned that this not always being possible is a reality in journalism.

We always strive to to meet that expectation with any given story, but we aren't the Washington Post. We don't have the resources to go completely in-depth on one issue, especially when there are so many that people expect us to cover anyway. That's where the community has to come in and work with us. I've said before that journalists, like other people, are not omniscient, and we're not perfect.

You will still get reliable information out of what we do every day. When we print an error, we own up to it and make the corrections. Don't believe me? Ask me, Jared and Eric about the mistakes we've made. We depend on your support not just to get it right, but to also make it meaningful. #SmallTownPR is a mode for the relationships we cultivate and the rapport we earn with the leaders and shakers.

I will quickly return to the other part of the title, which actually invokes an exchange I had on Facebook today where a "friend" shared a post that had screenshots of one of our stories. I said that it was irresponsible, and that it also undermines our work when someone essentially steals it. The Banner Graphic is a business where I and everyone else here earn a living, and subscriptions are what keep us going.

If you want to know what is going on and be informed, just get a subscription. It's worth more than the 10 bucks you'd spend for both the paper and online access. It's really that simple.

For the record, our subscriptions have increased seven percent since we put up the paywall in December. All of us will take that in a heartbeat. It tells us that more and more people are supporting us and what we do as public servants.

To those who stick with us, depend on us and trust us, you have our thanks.