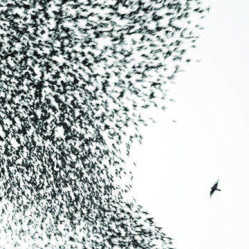 This is part eight of a 10-part series on Jared's favorite albums of each year of the decade. The series will conclude with his top 10 albums of 2009, which will be published in the Dec. 31 edition of the Banner Graphic.

Any big music fan has had the experience. You have a band you love, yet most of the world doesn't seem to know they exist.

Sometimes things change. Suddenly, the band makes an album that's a little more accessible, and the public seems to take notice. As a fan, shouldn't you think everybody suddenly got smart and realized what they'd been missing? You're happy for both the band and yourself, correct?

Not if you're a rock snob. For these tortured creatures, the true enjoyment of music comes not from loving what is good, but from hating what is not good or, even worse, what is -- gasp -- popular.

This is exactly why there was a backlash to Wilco's 2007 release Sky Blue Sky It's not exactly like the record lit up the Top 40, but it debuted at No. 4 on the album sales chart and some of the songs were featured on Volkswagen commercials. This was too far for the "true believers."

What also changed from 2004's A Ghost Is Born to Sky Blue Sky is the sound simplified. Over its first five albums, Wilco morphed from an alt-country outfit formed from the ruins of Uncle Tupelo to a nearly unrecognizable experimental rock group that made "smart" music.

For me? That's all crap. I love Wilco, but A Ghost Is Born is nearly unlistenable. There's no emotion to it. It's the only Wilco studio effort I don't own.

I also understand that 2002's Yankee Hotel Foxtrot is widely considered to be the bands' masterpiece, and it might be. I understand what technically makes it a great album. What it doesn't do is touch me.

Sky Blue Sky is my favorite Wilco record because it touches my heart. I don't want music to make me smarter. I want to laugh. I want to cry. I want to tap my feet and sway. This record has that ability.

There's the title track about frontman Jeff Tweedy's childhood realization he had to get out of his hometown. There's another about Tweedy's father after and his experience after the death of Tweedy's mother ("On and On and On"). Yet another is a comical look at a man trying to fill his time after the departure of a lover ("Hate It Here").

These songs are real to me. I've lived one of them and desperately hope never to live the other two.

The critics who liked the album commonly described it as "mature." It was mature and it should have been. Tweedy, the chief creative force behind all things Wilco, turned 40 shortly after its release. He's been married since 1995 and has two kids.

Besides this, in the last 10 years, Tweedy has kicked the habits of drinking, prescription painkillers and smoking.

So sue the guy if he's grown up a little.

And all this fails to mention "What Light," "Walken" and "Impossible Germany," three of the best songs on the album.

"Impossible Germany" is especially delightful, as it picks up throughout, building to a nice solo where twin guitars weave in and out of each other, trading lines.

(As a side note, can it really be a solo with more than one instrument? It runs a bit counter to the literal meaning of solo. I've long considered "Free Bird" to have one of the top two solos of all time, but it has three guitars. I may have to reconsider my whole view of music.)

This album brought beauty back to Wilco's music. It brought back emotion. For all the nice things the two previous "smart" albums did, they seemed a bit antiseptic at times. None of that here.

The Avett Brothers, Emotionalism: I know they'd been around before this, but this was my first Avett Brothers album. It's been in heavy rotation since.

Spoon, Ga Ga Ga Ga Ga: Once again, anything Spoon has made this decade is worthy of note. Let's hope Transference, due Jan. 18, is cut from the same mold as the rest.

The Doc Marshalls, Honest For Once: I often say no one has heard of the bands I love, but I really mean that no one else I know has heard of these guys. But their Cajun, honkeytonk mix is outstanding. This is real country music, complete with an actual murder ballad in "You Know What the Law Is in Texas."

The New Pornographers, Challengers: Most advanced set yet from indie rock supergroup. The members continue to churn out power pop as an ensemble and in other projects, and no one should be complaining.