My first full year as a music critic has been a good one. After years of wandering in the wilderness, surviving on music from the past, this year has pulled me back in to actually listening to new stuff.

And the year has offered its share of outstanding new music. From a longtime performer like Steve Earle to 19-year-old Haley Dreis (who occupies a different musical universe than Earle), I've heard my share of new stuff this year. On some level, I've enjoyed every bit of it. 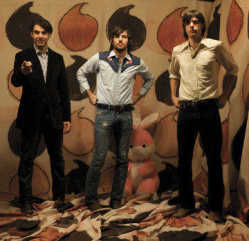 When it came out back in September, I said the major-label debut from this North Carolina trio would be the year's top album. Three months later, I'm feeling no buyer's remorse.

Through a decade of albums and touring, the band was embraced as one of the outstanding young acts in bluegrass, and rightly so. But there was also something beneath the surface, something that begged for a wider audience. There was the tight, brotherly harmonies of Scott and Seth Avett. There was the refreshing earnestness of their songwriting. It went way beyond the sound of banjo, guitar and bass.

Then came I and Love and You, with its piano-driven sound and instant accessibility to non-fans. It would be easy for the old fans to label it the "sellout" record, but why? What was great about the Avett Brothers was never so much the banjo, as it was the voices of two brothers blended together, singing songs that came straight from the heart.

On that front, songs like the title track, "Head Full of Doubt/Road Full of Promise," "Ten Thousand Words," "Laundry Room" and "Ill With Want" are among the best the Avetts have produced to date. And that list leaves out the high-energy numbers for which the group is known. "Kick Drum Heart" and "Tin Man" fit nicely into that tradition.

This band still seems to be on the upswing.

Like the Avett Brothers, NEEDTOBREATHE is a group of guys from Carolina (in this case, South Carolina) who seem to be on the verge of big things. Just like the Avetts, NEEDTOBREATHE released an album this year that should lead them to bigger places.

The Outsiders opens with the title track, a declaration of the band's feelings of their position within the more "mainstream" musical scenes in New York or Los Angeles. By being outsiders, though, they've been free to make their own way for three albums and really forge their own sound.

The results on this third release are sounds that range from hard-charging rockers like "Prisoner" to the beautiful duet "Stones Under Rushing Water" to the gospel sound of "Lay 'Em Down." We also get a straight-up worship song in "The Garden."

The album features three different producers over its 14 tracks, and the diversity of sound is obvious. At the same time, though, it all hangs together.

If this is the sound that springs from being outsiders, let's hope success doesn't turn these guys into insiders.

Justin Townes Earle can't seem to escape his name. Certain expectations come with being the son of Steve Earle.

Fortunately for the 27-year-old, he looks to have it in him to be every bit the songwriter and musician his old man is. At this point, although he sounds a bit like his dad, he actually has a better set of pipes.

Midnight at the Movies puts all this on display. Earle keeps the old-time sound of his first full-length album The Good Life on tracks like "Poor Fool" and "What I Mean to You," but also gives much more pop-influenced performances on the title track and "My Mother's Eyes," probably the two strongest songs on the record.

Then there's a mandolin and guitar rendition of the Replacements' classic "Can't Hardly Wait," which is one of the most fun moments on the record or in concert.

Tribute albums are a tricky proposition. Certainly, the artist being honored deserves the tribute, but all too often we ask, "What gives them the right to do that song?"

No one in their right mind was saying that in May when Steve Earle released Townes, a 15-song collection of the music of Townes Van Zandt. Not only is Earle probably better known than Van Zandt, the two were also friends for more than two decades before Van Zandt's death in 1997.

So Earle might be the person most suited to covering this music, a task he accomplishes wonderfully. Performances range from the original style ("Pancho and Lefty") to bluegrass ("White Freightliner Blues") to modern remakes Van Zandt couldn't have imagined ("Lungs").

What unites it all is the underlying sadness and humor of nearly all of Van Zandt's music. Earle is no stranger to that world.

We also get a fun moment when Earle sings with son Justin Townes Earle on "Mr. Mudd and Mr. Gold."

Unsigned artists aren't supposed to make these lists. On the other hand, a band this good shouldn't be unsigned.

T Bird and the Breaks are a young soul outfit from Austin, Texas who sound like they came out of the 1960s world of James Brown's heyday. Learn About It gives us a sound rarely found in the popular R&B music of the last 20 or 30 years. It's an 11-piece outfit that includes a three-piece horn section and three female background singers.

Listening to this music on an iPod almost seems wrong. Instead, it would sound best on some crackling vinyl. Songs like "Two-Tone Cadillac," "Blackberry Brandy," "Take Time" and "Sunday On My Own" recall a number of '60s soul masters including Brown, Wilson Pickett and Otis Redding.

Black Joe Lewis and the Honeybears are doing something similar to this and getting a lot more attention. While I'll admit they also made an outstanding record this year, T Bird did it just a little better.

Why did it take Wilco seven albums to come out with a self-titled release? To my knowledge, Metallica held the previous record with five.

The bottom line, though, is I don't ask questions of frontman Jeff Tweedy. The band continues to expand its horizons with this release and proves never to be boring.

My personal favorites on this one are "You Never Know" (which has song of the year potential), "One Wing," "I'll Fight" and "Everlasting Everything."

I hope to not be a jinx, but this band doesn't do bad albums.

Neko Case's voice is beautiful and haunting. It's the best working in music today.

She puts it to work in a variety of ways on Middle Cyclone. We get power pop ("I'm an Animal"), unadorned folk ("Middle Cyclone") and classic Case songs that would fit on any of her solo works ("People Got a Lotta Nerve").

I never would have dreamed there would be two tribute albums on this list, but this collection deserves attention. Mulcahy, a solo artist and former leader of Miracle Legion, lost his wife unexpectedly in 2008. This left him to raise his twin daughters alone.

Proceeds from the album go to Mulcahy's daughters as he tries to be a full-time dad and musician.

My personal favorite is "Woke Up In the Mayflower" by Josh Rouse.

9. Palace and Stage -- Dusty Rhodes and the River Band

No artist packed more energy into an album than this California quintet. If you aren't dancing (Lord knows I'm not.) then you should be driving fast down the road to "All One," "Blind Lead the Blind," "Palace and Stage" and "Magic Words."

It's hard to describe this music. There are elements of rock, pop, punk, country, R&B and gospel. If I had to put a name to it, though, I'd have to call it "fun."

Dreis is the second independent artist to find her way onto this list. As a journalism student, classical violinist and singer-songwriter, she seems to squeeze every bit of energy and life out of each day.

Tracks like "Dancing To a Symphony," "Crying Out For You" and "Beautiful to Me" are amazing for a 19-year-old who's been writing songs for less than two years.

Here's hoping this busy student will find time for a second release.